As Beijing's trade negotiators edge towards a deal with Washington, China's top court has said it will strengthen protection of intellectual property (IP) rights this year.

Supreme People's Court Chief Justice and president Zhou Qiang said yesterday that this is one of the ways the courts could "ensure continued economic growth and social stability", a key task for the coming year.

In the past year, the courts have handled more than 288,000 IP cases, an increase of 41.8 per cent from the year before, said Mr Zhou.

"We have built a national level appeal mechanism for intellectual property rights protection, and established an IP court under the Supreme People's Court," Mr Zhou said at a plenary meeting of the National People's Congress (NPC), China's legislature.

He added that the courts would also better protect the legal rights of private businesses in order to allow entrepreneurs to "focus on starting businesses, feel assured about their investments and run their businesses with peace of mind".

China's patchy record in protecting intellectual property has long been an American concern. 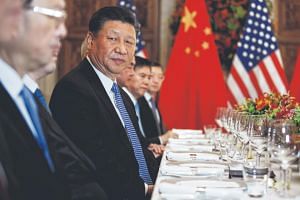 State news agency Xinhua said both sides discussed the text of the trade deal and "made a plan for the next stage of work arrangements", without giving further details.

The two countries are locked in a bitter trade war that has seen tariffs slapped on billions of dollars of goods from both sides.

But after several rounds of trade talks, the world's two biggest economies seem to be inching toward an agreement.

Officials said previously that Beijing was turning its focus on IP protection as a necessary component of its ongoing economic reforms and not because of external pressure.

But it has also set in motion measures to better safeguard such rights since a truce in the trade war was declared last December.

Apart from setting up the IP court that Mr Zhou mentioned, the NPC is also expected to pass a foreign investment law on Friday that will ban forced technology transfers from foreign companies to their Chinese partners.

And yesterday, China's National Intellectual Property Administration told reporters that the country would be beefing up its IP protection regime in several ways.

These include setting up a batch of IP protection centres to handle related matters, and reducing the time taken to review the filing of high-value patents.

The administration's head, Mr Shen Changyu, said China's patent law was being revised to put in place stiffer punishments for those who infringe IP rights.

A version of this article appeared in the print edition of The Straits Times on March 13, 2019, with the headline 'Measures to beef up protection of IP rights'. Subscribe
Topics:
More
Whatsapp Linkedin FB Messenger Telegram Reddit WeChat Pinterest Print Purchase Article Copy permalink