RIKUZENTAKATA (Iwate) • Rikuzentakata city mayor Futoshi Toba was elected just four weeks before a tsunami wiped out his city, and has spent nearly all his more than eight years in office overseeing its rebuilding.

What he wants to achieve is for his city to one day overcome the psychological notion of "normalisation", which is the acceptance of things returning to their normal state.

"I want to foster a city with the spirit and drive to take on challenges," he told Singapore media yesterday, adding that he wants to take a leaf from the Republic's success story to create a city with the potential and courage to pursue new opportunities.

In this regard, he said the "normalisation" mentality could be an invisible hurdle to progress.

Only when he sees the drive to achieve will he know that Rikuzentakata has truly overcome the March 11, 2011 disaster, during which tsunami waves as high as 18.3m wiped out much of the city, killing 1,604 people and leaving 202 unaccounted for.

Today, there are newly paved roads and new buildings, including a community hall and library that were constructed with the help of Singaporean donations.

I want to foster a city with the spirit and drive to take on challenges.

RIKUZENTAKATA CITY MAYOR FUTOSHI TOBA, on what he wants his city to learn from Singapore.

Plenty of construction is still going on.

Mr Toba said that with Japanese government funding for reconstruction projects due to end by 2021, and as it still remains unclear if such national support will continue, his priority is to finish as many projects as he can in the next 11/2 years. 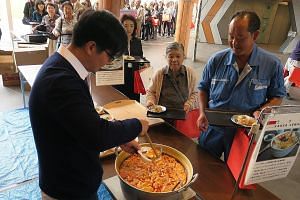 Mr Toba hopes the site can be an impetus to drive more visitors to the city, which had welcomed one million tourists a year before the disaster. The number has fallen to 500,000.

Beyond tourism dollars to fire up the economy, he also hopes to grow the demand for local produce such as oysters and scallops abroad, including in Singapore, to encourage local businesses to innovate and raise their productivity.