BEIJING - Managing the strategic rivalry between China and the United States is key if the world is to navigate and tackle the problems of the next financial downturn, Senior Minister Tharman Shanmugaratnam said at a global forum in Beijing.

Tensions between the world's two largest economies were one of three key risks Mr Tharman flagged during a panel discussion on handling a future financial crisis at the Bloomberg New Economy Forum on Thursday (Nov 21).

Mr Tharman said tackling the problems of a future financial crisis or a recession can only be done if longer-term issues are tackled.

"The central problem is managing the strategic rivalry between the US and China, with technological rivalry, and the possibility of bifurcated supply chains being the most important dimension of that," Mr Tharman told a hall of about 500 top government and business leaders, and academics.

Failing to manage the relationship between these two giants will mean that underlying economic problems - weak private investment, innovation and productivity growth - would be more difficult to handle, he said.

"If we end up in a world of bifurcated technology standards and supply chains, it is a world of less innovation, less dynamism, and it is a world where we cannot tackle the fundamental underlying problems," said Mr Tharman.

The two other key issues raised by Mr Tharman were the potential for conflict in the Middle East, and politics that polarise rather than unite.

"How these play out are unknowns, but they are not beyond human agency, or our own ability to shape the future. Our responsibility is to shape that future,” he said.

The ways to deal with the economic problems today were not with fiscal or monetary injections but boosting innovation and private investment. 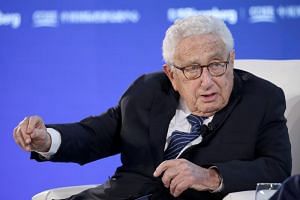 US and China do not understand each other despite many strategic dialogues: Chan Heng Chee

Asia can be voice of moderation, forge common cause despite US-China tensions: ESM Goh Chok Tong

"I think by any measure, in both mature and developing economies, there's huge scope for investment that is still untapped," he said.

Mr Tharman arrived in Beijing on Wednesday for a three-day visit to attend the forum, and other meetings with government and business leaders, and academics.

Bilateral tensions between the US and China have escalated over the past year, with both sides locked in a bruising trade war since Washington first levied tariffs on Chinese goods in July last year.

The trade war has also caused significant headwinds for the global economy. The International Monetary Fund warned last month that trade tensions could drag down global growth to 3 per cent this year, its slowest pace since the financial crisis a decade ago.

"Trade wars in history have broken the global economy down, and we are seriously facing that possibility," he said.

Another panellist, Inter-American Development Bank president Luis Alberto Moreno, said one of the big challenges for governments was being able to carry out needed structural reforms to head off a recession or crisis.

US-China relations were a hotly discussed topic at the forum, held beside picturesque Yanqi lake on the outskirts of the Chinese capital.

This is the second edition of the elite conference, launched by US media mogul Michael Bloomberg, to discuss global issues and how to solve them. The first forum was held in Singapore last year.

Chinese Vice-President Wang Qishan kicked off the conference on Thursday, saying in his keynote address that while China was facing serious external and internal challenges, it remained committed to peace and modernisation.

While he did not mention the US directly, the Chinese leader, who is a key figure in trade negotiations, noted that building trust and understanding were essential to solving challenges.

"A strong sense of responsibility is also important. We must each keep our own house in order instead of blaming others for our own problems," said Mr Wang.