TAIPEI (AFP) - Malaysia on Friday (April 15) deported 20 Taiwanese implicated in fraud back to Taiwan, despite Beijing seeking to have them sent to mainland China, Taipei said, in a new bout of diplomatic sparring between the rivals.

The latest incident involved a group of 52 Taiwanese, some of whom were due to be deported to Taiwan on Friday as China allegedly intervened, just days after Taipei accused Beijing of "abducting" its citizens from Kenya.

"According to our understanding Malaysia was willing to return them to Taiwan but China later expressed their wish for them to be sent to China since the subjects of fraud are in the mainland just as in the Kenya case," Premier Chang San-cheng told reporters. 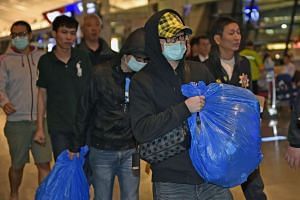 Taiwan's Foreign Ministry said late on Friday that Malaysia had deported 20 of them to Taiwan following negotiations.

Taipei "will continue to negotiate with the Malaysian government so the remaining 32 Taiwanese suspects can return to our country soon to face investigation", it said in a statement.

According to Taiwan's Foreign Ministry, the Taiwanese were detained by Malaysian police last month during five raids linked to telecom fraud, which also led to the arrests of 65 mainland Chinese and two Malaysians.

Malaysian and Chinese officials did not have immediate comment on the case.

Taipei this week blasted Beijing for being "rude and violent" over the deportation of 45 of its citizens from Kenya to China where they face investigation for fraud.

It has also filed a suit against several top officials in Kenya for ignoring a court decision which cleared some of the suspects and "illegally cooperating" with China to deport the Taiwanese.

Taiwan's government said it planned to send a delegation to the mainland on Monday at the earliest to discuss the Kenyan deportations.

Taipei has been increasingly isolated on the diplomatic stage with just 22 states recognising it after Gambia last month resumed ties with Beijing.

Observers say China is stepping up pressure on Taiwan's President-elect Tsai Ing-wen who is set to take office in May as Beijing does not trust her historically pro-independence party.

China considers Taiwan to be one of its provinces awaiting reunification, by force if necessary, even though the island has ruled itself since 1949 following a civil war split.