This is among suggestions made by Edwin Tong at bilateral forum

From catching up on Japanese drama serials like Oshin on their Sharp or Panasonic television, to shopping at Yaohan department store for their first Casio or Fujifilm for their Canon and Konica cameras, Singaporeans have surrounded themselves with Japanese brands.

Senior Minister of State for Law Edwin Tong cited these examples yesterday to illustrate the omnipresence of Japanese brands in Singapore through the decades.

This includes the supply systems that Meidensha set up to power Singapore's first MRT lines in 1987, the new retail concepts brought by Takashimaya when it opened in the Republic in 1993, and the "Toyota Way" of 2001, which comprised principles of continuous upgrading and respect for others.

"For many Singaporeans, 'Made In Japan' is synonymous with quality and innovation," Mr Tong, who is on a three-day official visit to Japan, told the first Japan-Singapore International Legal and Dispute Resolution Conference.

"Japanese companies have continued to adapt over the years and evolve, to delight and show what is possible," he told the audience of 200 government officials, business leaders, lawyers and academics.

He quipped: "I've been told by my female colleagues that they now buy Fujifilm not for photo-taking, but for skincare.

"So we all now look better, not on Fujifilm, but with Fujifilm on."

Mr Tong urged Japan to do more with Singapore on three fronts: as an Asian base for companies, a partner in regional infrastructure projects, and a venue for resolving disputes if they arise.

"We are that one node in Asia, small but concentrated, from which companies can understand different Asian cultures, draw talent from across Asia, and market to the whole of Asia," he said, citing optical products manufacturer Hoya, tech giant Rakuten, and flavour and fragrance company Takasago as examples of firms that have set up key offices in the Republic.

And with Japanese investment in Asean infrastructure projects since 2000 totalling more than US$230 billion (S$312 billion), Mr Tong said he believes Japan can tap Singaporean firms with expertise in master planning as well as legal, tax and accounting services. 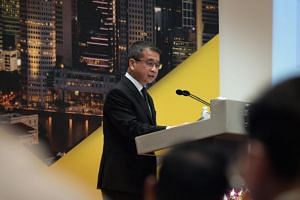 He noted that the Infrastructure Asia office - an initiative Enterprise Singapore and the Monetary Authority of Singapore set up last October to facilitate the development, financing and implementation of infrastructure projects in the region - is one way Japan can come on board.

The Singapore Infrastructure Dispute-Management Protocol, likewise, can help parties manage disputes that arise as well as reduce the risks of time or cost overruns.

The Republic's reputation for neutrality, he said, has seen it become among the world leaders in dispute resolution, with options for international commercial litigation, arbitration and mediation.

More than 80 per cent of the cases heard by the Singapore International Arbitration Centre, Mr Tong said, have no connection with the Republic whatsoever.

Singapore, too, lends its name to a new United Nations treaty - the Singapore Convention on Mediation - that will be inked in the Republic on Aug 7.

"In this complex operating environment, businesses will need the support of legal professionals, now more than ever," Mr Tong said, urging Japanese law firms to also grow their presence in Singapore to support their compatriots who are expanding in the region.

Japanese companies are one of the major users of Singapore's dispute resolution services.

The number of cases involving parties from Japan filed at the Singapore International Arbitration Centre has more than doubled - from 13 in 2016 to 30 in 2018.

Japan's Vice-Minister of Justice Hiroyuki Tsuji noted that "Singapore has become internationally recognised as a hub for international dispute resolution - be it litigation, arbitration or mediation".

This is the second such high-level legal and dispute resolution conference, following a forum held in China this January.

Mr Tong told reporters: "Their commonalities lie in that Singapore is a trusted neutral forum.

"Both Chinese and Japanese firms are going big on infrastructure development, and our protocols on large-scale infrastructure dispute management, together with a suite of different dispute resolution options, will help to advance their business opportunities."