HONG KONG - All foreign domestic helpers in Hong Kong hired or renewing their contracts from Jan 1 next year will be protected by new regulations on window cleaning aimed at avoiding deadly accidents in high-rise buildings, reported the South China Morning Post.

Under a new clause in these contracts, employers are not allowed to ask helpers to clean the outside of any window not on ground level or next to a balcony or corridor. Other conditions are that the window is fitted with a secured grille and no part of their body except their arms extend beyond the ledge.

However, a domestic helper group pointed out that around 300,000 working maids were not covered by the Labour Department's new rules, and that employers violating the clause would not be held criminally liable.

The Philippine consulate had announced in October a new clause for all Filipino domestic helpers' contracts stating that cleaning the outside of windows would no longer be a part of their duties.

The consulate later put the plan on hold for 30 days after the Hong Kong government requested for more time to work out the details and get everyone on board.

Commissioner for Labour Carlson Chan Ka-shun urged existing employers not bound by the contractual clause to follow the new rules and ensure the safety of their maids. 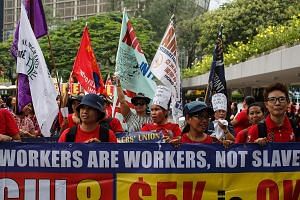 Maids in HK protest against cleaning windows after deaths

He said while employers would not be held criminally liable for breaking the rules, they might be asked to chip in if insurance companies compensate victims of window cleaning accidents.

Employees could also approach the Labour Department or submit a claim to the Labour Tribunal if they were unfairly dismissed over the new clause, he added.

Mr Eman Villanueva, spokesman for the Asian Migrants Coordinating Body, which champions the rights of domestic helpers, said he was worried that existing contracts had been left out.

"The majority of the helpers remain unprotected," he said, also pointing out that punitive provisions were left out from the new clause. "If an employer violates the clause, what is the level of accountability?"

Mr Villanueva told SCMP that a better solution was to amend the labour law, as proposed by domestic helper groups.

Commissioner Chan explained it would take two years at most from Jan 1, 2017 for the clause to be inserted in all domestic helpers' contracts, as employers who intend to continue employing their current maids would have to renew their contracts.

The Immigration Department would still process contracts signed on or before Dec 31 this year using older forms without the clause, he said, provided the applications reached the department on or before Jan 27 next year.

The department will step up publicity to ensure awareness among employers and maids.

In Singapore, the Ministry of Manpower (MOM) prevents employers from allowing their maids to clean windows unless two conditions are met. First, the employer or an adult representative of the employer must be present to supervise the maid. Also, window grilles have to be installed and locked while the windows are being cleaned.

Failure to comply constitutes a breach of the Employment of Foreign Manpower (Work Passes) Regulations in Singapore. Employers who fail to comply may be prosecuted and permanently barred from hiring a maid.

On May 3, 2012, an employer in Singapore was fined the maximum penalty of S$5,000 for failing to ensure the safety of her maid who fell while cleaning windows.