Malaysian Prime Minister Mahathir Mohamad arrives in China today, his first visit to the country as premier after 17 years.

During the five-day visit, he will meet top Chinese leaders, including President Xi Jinping and Premier Li Keqiang, as well as business leaders in Hangzhou and Beijing.

His packed itinerary includes a visit to the headquarters of tech giant Alibaba and carmaker Geely in Hangzhou, and meetings with Chinese leaders in Beijing.

The visit has been billed by both nations as a chance to reset and recalibrate their bilateral relationship after Tun Dr Mahathir's Pakatan Harapan (PH) government took power in May.

In an interview with Xinhua news agency published yesterday, Dr Mahathir said ties with China were very important and his new government wanted "close relations" with its bigger neighbour.

He added that his views on China remain unchanged from his first stint as prime minister from 1981 to 2003, and he believed both countries would be able to solve their differences amicably.

The Malaysian Foreign Ministry, in a statement yesterday, called the visit "a new milestone in the consolidation of bilateral ties", and said it would set new strategic pillars to boost future bilateral cooperation.

China's Ambassador to Malaysia Bai Tian, in a commentary in the official People's Daily on Wednesday, said bilateral ties stood at a "new historical starting point".

NOT ON A CRUSADE

At the end of the day, Mahathir is not embarking on an anti-Chinese crusade. It does not serve his objectives to improve local governance and boost the local economy.

MR LYE LIANG FOOK, ISEAS - Yusof Ishak Institute senior fellow. Dr Mahathir, he said, will likely ask for the Chinese projects to be reviewed - either for costs to be trimmed or their scale reduced.

Before the PH coalition ousted the Umno-led Barisan Nasional from power, it accused the then ruling party of selling out national interests in its dealings with China's government and corporate sector.

The visit - Dr Mahathir's longest official overseas trip since he became premier in May - is indicative of China's primacy in Malaysia's foreign policy calculations, and the importance Malaysia is attaching to the breadth and sensitivity of this "reset" in ties, said experts.

Before the start of the visit, Dr Mahathir sent emissaries to engage China, in what were seen as moves to reassure Beijing. Among them were key adviser and corporate titan Robert Kuok, and trusted lieutenant Daim Zainuddin, who heads the government's advisory council.

The US$20 billion (S$27.5 billion) East Coast Rail Link (ECRL) project and a contract to build two gas pipelines worth US$2.3 billion made headlines after Malaysia questioned the cost. The two projects, now suspended, will be on the agenda although Dr Mahathir has hinted at some flexibility.

"We don't think they are viable. If we can, we would like to just drop the projects but if that cannot be done, we will have to postpone them," he told Associated Press in an interview this week.

The ECRL is part of China's ambitious Belt and Road Initiative (BRI), and Beijing is unlikely to agree to its cancellation.

In the Xinhua interview, Dr Mahathir said his government welcomed foreign investment, especially those that bring in capital, technologies and employment opportunities for Malaysians. 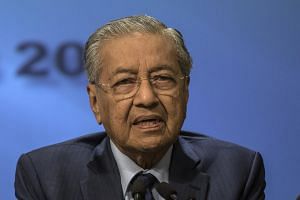 China is not to blame for 'lopsided' deals in Malaysia, says KL's new foreign minister

ISEAS - Yusof Ishak Institute senior fellow Lye Liang Fook said Dr Mahathir will likely ask for a review of the Chinese projects - either for costs to be trimmed or their scale reduced. Such an outcome would allow him to say that he has improved governance or oversight of these mega projects, Mr Lye said.

"At the end of the day, Mahathir is not embarking on an anti-Chinese crusade. It does not serve his objectives to improve local governance and boost the local economy."

Dr Rais Hussin, who is the chief strategist for Parti Pribumi Bersatu Malaysia - Dr Mahathir's party-said the government is against corruption, and not China.

"There are no Cabinet ministers in Malaysia who, to date, oppose the BRI... They just want it to be more accountable and transparent to prevent any insidious corruption," he said.

But Associate Professor Li Mingjiang, from the S. Rajaratnam School of International Studies, said it was not likely that China would make immediate concessions to Malaysia.

"It would set a bad precedent - that if there are problems with BRI projects, countries can just take a step back and renegotiate," he said.