She explains government's position to youth at a closed-door meeting

HONG KONG • Hong Kong leader Carrie Lam has said that she had met a group of young people about the pro-democracy protests gripping the city, but she showed no sign of budging in a continuing stalemate over the movement's demands.

Mrs Lam said she explained the government's position at the Monday meeting, which was closed-door and unannounced.

She disputed complaints that her government is ignoring the protesters, whose demands include the withdrawal of an extradition Bill, an independent inquiry into what they believe is excessive use of force by police at the demonstrations, and democratic elections.

"It is not a question of not responding," she told reporters before a weekly meeting with her Executive Council yesterday.

"It is a question of not accepting those demands."

Hong Kong, a Chinese territory, has seen more than two months of youth-led protests that have often ended in clashes with police.

More than 80 people were arrested last weekend after protesters occupied city streets. They built barriers across the roads and threw bricks and petrol bombs to try to block the police, who used tear gas to drive them away.

Mrs Lam announced last week that she was creating a platform for dialogue and said yesterday that it would include protesters. Opposition lawmakers have questioned the sincerity of her initiative, calling it a delay tactic.

It was not clear who attended the Monday meeting with Mrs Lam and the education and home affairs ministers. The South China Morning Post newspaper, citing an unidentified source, said about 20 people took part and that they were mostly in their 20s and 30s. 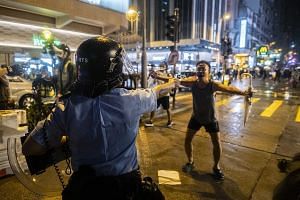 Mrs Lam said her government had accepted the movement's main demand by suspending the extradition Bill, which would have allowed suspects to be sent to mainland China to face trial. She has declared the legislation dead, but protesters are demanding its formal withdrawal.

The proposal fuelled concern that China is chipping away at the separate legal system and rights that semi-autonomous Hong Kong has under a "one country, two systems" framework. Huge marches against the legislation have drawn more than a million people, according to organiser estimates.

Protesters have also disrupted subways and the airport, surrounded police stations and spray-painted slogans on their walls and broken into and vandalised the legislative chamber.

Not all of the protesters resort to confrontation, but those who do say it is needed because the government is not responding to peaceful demonstrations.

Mrs Lam said it would be unacceptable for the government to accede to demands because of such pressure.

"If violence continues, the only thing that we should do is to stamp out that violence through law enforcement actions," she said. She dismissed any suggestion of her resignation, saying a responsible Chief Executive should continue "to hold the fort and do her utmost to restore law and order in Hong Kong".

Meanwhile, Hong Kong's Cathay Pacific Airways yesterday said it had launched an investigation after 13 oxygen bottles used by cabin crew in emergencies were found empty, or partially empty, on two of its aircraft.

The discovery, which came as the airline is under scrutiny from China's aviation regulator, was made on the ground during routine inspections before a departure from Toronto, the carrier said.

Cathay has emerged as the highest-profile corporate target as Beijing looks to quell protests in Hong Kong, with the Chinese government demanding that it suspend staff involved in a protest movement, citing flight safety concerns.

A version of this article appeared in the print edition of The Straits Times on August 28, 2019, with the headline 'Lam starts talks but refuses to budge on protesters' demands'. Subscribe
Topics:
More
Whatsapp Linkedin FB Messenger Telegram Reddit WeChat Pinterest Print Copy permalink