SEOUL (AFP) - When ice hockey players from North and South Korea skated together onto the Olympic rink in matching white kits last year, it was seen as a symbol of the rapid diplomatic progress catalysed by the Winter Games.

With Pyongyang subject to multiple international sanctions over its nuclear and ballistic missile programmes, sport is one of the few spheres where real co-operation is possible between the two countries.

However, analysts say sporting diplomacy on the divided peninsula will go nowhere without tangible advances on underlying issues surrounding the North's atomic arsenal.

The last 12 months have seen a series of joint Korean sides follow in their tracks, from judo to basketball.

Results have been mixed. 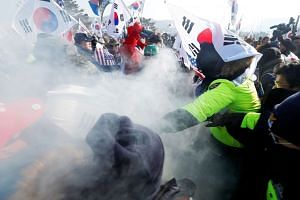 Politics at play at Winter Olympics

However, each new unified team has been met with less and less fanfare than the one before, as familiarity breeds public disinterest.

And off-field progress on the North's denuclearisation has been even more limited than the unified teams' victories.

"The thing with a stunt is that it receives a lot of attention at first but its originality quickly fades," said Mr Go Myong-hyun, an analyst at the Asan Institute of Policy Studies in Seoul.

"Sports diplomacy won't be sustainable unless it expands to other exchanges," he added.

The women's ice hockey squad sparked a media sensation at Pyeongchang despite losing all five of their matches by a combined scoreline of 28-2.

The skaters - 23 Southerners and 12 from the North - made headlines from start to finish, including with a stroll to the beach, language-barrier troubles and a friendly rendezvous at an Olympic Village McDonald's where they shared drinks.

North Korea's presence at the Games was a transformative moment on the peninsula, where Pyongyang and Seoul - backed by allies from each side of the Cold War - fought each other to a standstill in the 1950-53 Korean War.

They remain technically at war after hostilities ceased with an armistice rather than a peace treaty, and 2017 saw tensions soar as the North detonated its most powerful nuclear device ever and launched missiles capable of reaching the entire US mainland.

Before the Olympics, as North Korean leader Kim Jong Un and US President Donald Trump traded personal insults and threats of war, Pyongyang had kept silent on whether it would participate in the Games.

But then dovish South Korean President Moon Jae-in offered to postpone major joint military drills with the US, while Mr Kim said he was willing to send a delegation to Pyeongchang, triggering rapid-fire rounds of diplomacy.

At the opening ceremony, Mr Moon sat in the VIP box with US Vice-President Mike Pence and the North Korean leader's sister, ms Kim Yo Jong.

Mr Moon and Mr Kim have since met three times and the North Korean leader had a landmark summit with Mr Trump - the first of its kind - in Singapore in June, with a second scheduled for Vietnam from Feb 27-28.

Pyongyang and Seoul have announced plans for a joint bid to host the 2032 Summer Games.

But unity on the pitch can only go so far.

Diplomatic progress has now stalled, with North Korea demanding the sanctions against it be loosened and Washington insisting they stay in place until it denuclearises.

"In the absence of sanctions relief to allow for inter-Korean economic cooperation, we should expect North Korea to lose interest in sports diplomacy," Mr Stangarone told AFP.

In the meantime, he added, as sporting connections between the two Koreans becomes more frequent, "it will also be more commonplace and begin to lose its resonance".

The unified ice hockey team met a mixed response in South Korea, with critics saying its hasty formation just two weeks before the Games deprived their own athletes of playing time.

That highlighted the disparity in attitudes between the young South Koreans who prioritise "impartiality and justice", and policymakers who focus on "reconciliation and cooperation on the Korean peninsula", said Professor Koo Kab-woo at the University of North Korean Studies in Seoul.

Asan analyst Mr Go added: "The idea that we are one has been rooted in both South and North Korea, but the reaction showed that this message was wearing out."