When popular former prime minister Junichiro Koizumi retired from politics in 2009, he looked no further than his second son to inherit his Kanagawa prefecture seat in Parliament.

Such is the power of political dynasties and name recognition in Japan that Mr Shinjiro Koizumi, then a 28-year-old rookie, won convincingly even though his Liberal Democratic Party (LDP) was booted from government in the election in 2009.

Politics is a family business in Japan, where nearly 40 per cent of the LDP's lawmakers are said to be descendants of former politicians.

He is now gunning for a fourth term as lawmaker for a ward in Kanagawa that encompasses his hometown, the coastal city of Yokosuka, about an hour's drive to the south-west of Tokyo.

But Mr Koizumi is among many others who are no longer riding on the coat-tails of their forebears; he has come into his own over the past eight years in politics. He is frequently being touted as a future prime minister candidate with domestic and global media alike comparing him to French President Emmanuel Macron and Canadian Prime Minister Justin Trudeau.

A brooding but charismatic politician with disarming idol-worthy looks, he has won over legions of fans. Many have been impressed with his credentials, which include a master's degree in political science from New York's Columbia University, and experience with a Washington think-tank.

He is now one of the LDP's key flag bearers in campaigning for the nationwide election next Sunday in which all 465 seats in the Diet, or Lower House of Parliament, are up for grabs.

Latest media polls show that the LDP and its coalition partner, Komeito, are on course to retain their solid majority in the Diet. The nascent Kibo no To (Party of Hope), led by Tokyo Governor Yuriko Koike, is meanwhile losing steam.

Official campaigning kicked off last Tuesday and Mr Koizumi spoke to a lunchtime crowd at a busy traffic intersection in Ikebukuro, in Tokyo, merely two hours after Ms Koike addressed a smaller crowd.

The significance was not lost on astute observers - the ward was held by Ms Koike from 2012 until last year, when she defied the LDP to run for governor. The incumbent, Mr Masaru Wakasa, is her close aide and running on the Kibo no To ticket. 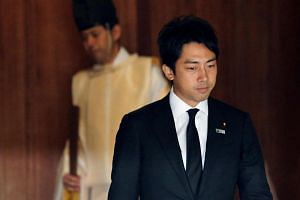 Spotlight on Japan's 'Macron', son of former premier Koizumi, ahead of Cabinet reshuffle

Mr Koizumi arrived 20 minutes late, having travelled from Yokosuka by subway, and was greeted like a rock star as spectators gushed over his humility and ability to connect with the masses. A 78-year-old retiree, Ms Teruko Usui, told The Sunday Times that the politician was "the hope of Japan".

Mr Koizumi, now the LDP's chief deputy secretary-general, has long championed a form of "children's insurance" to provide free education and, although not entirely similar in terms of policy fine print, the LDP has come to embrace social security measures for the future - including free education - as a key plank in the current polls.

In May, Mr Koizumi told the Sankei Shimbun: "I want to be a politician whom people can rely on and trust. I want people to want to participate in the creation of the future that I envision for this country."

And this forms the thrust of his campaign message in a video to voters: "By making the most of the vitality and strength of each and every person, and tapping on the strengths of each region, we can paint a bright future for Japan."