Tokyo's first female governor, Ms Yuriko Koike, who won handsomely in Sunday's election, has vowed to mend fences with the ruling Liberal Democratic Party (LDP) as the city gears up its preparations for the 2020 Olympic Games.

Having run without her party's blessings in a bruising campaign that political watchers said has exposed rifts within the LDP, Ms Koike, 64, yesterday said: "I'll ask for cooperation from LDP metropolitan assembly members to serve the interests of Tokyo residents."

This was a pledge echoed by top government spokesman Yoshihide Suga, who told a daily news conference that while it was "extremely regrettable" that the LDP-backed candidate did not win, "we need to cooperate with the governor for the good of Tokyo's people".

In a televised speech, Ms Koike, an LDP veteran who is a former defence and environment minister, vowed to fix the snags that have plagued Olympic preparations.

She zeroed in on the ballooning budget that, much to public discontent, has swelled to six times the initial estimates. The total bill is now expected to be about 1.8 trillion yen (S$23.5 billion), way above the 300 billion yen originally set aside by the Tokyo 2020 Organising Committee.

Part of this bill will be footed by Tokyo, and yesterday Ms Koike said she will put a lid on escalating costs.

She also promised more accountability and to slash her salary by half under what she calls the "Great Tokyo Reform".

To do so, she will set up a new department within the Tokyo metropolitan government, which will act as a watchdog over "whether taxes are being used correctly". She described the opaque handling of funds by the last administration as a "black box".

Her predecessor, the LDP- backed Yoichi Masuzoe, resigned in ignominy in June for splurging taxpayer funds on first-class travel, wining and dining, and pricey artwork.

Mr Toshiaki Endo, the minister in charge of the Tokyo Olympic and Paralympic Games, yesterday said the government is "on the same page" as Ms Koike on the need to reduce costs. 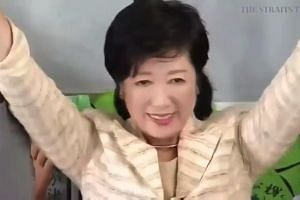 Political watcher Jeffrey Kingston, director of Asian studies at Tokyo's Temple University, said: "What she really needs to do is to change how the public and the world perceive Tokyo's Olympic preparations, which have lurched from one crisis to another."

This could be right up her alley, noted SIM University's Japan expert Lim Tai Wei, given her journalistic background and fluency in Arabic and English. He called Ms Koike an "experienced media veteran" who can provide a public relations boost.

Ms Koike was deemed a maverick by the LDP's top brass, who threatened to expel her for running without their support.

Yet Tokyoites gave her a stunning victory - and an indictment of a party seen as an "old boys' club" - as she won 44.5 per cent of the 6.6 million votes cast. She officially assumes her post today.

She won 1.1 million more votes than the runner-up, LDP-backed former internal affairs and communications minister Hiroya Masuda, who won 27.4 per cent of the vote.

Mr Suga yesterday said any punishment meted out to her will be decided by the LDP's Tokyo chapter, and Mr Hakubun Shimomura, special adviser to LDP president and Prime Minister Shinzo Abe, called her actions "anti-party".

But an unnamed party official from the Tokyo chapter yesterday urged restraint, noting that any punitive measures will "fly in the face of public opinion".

Ms Koike leads a sprawling metropolis three times the size of Singapore, with a population of about 13 million. Tokyo has an annual budget about the size of Sweden's, and an economy the size of Indonesia's.

Her first trip as governor will be to Rio de Janeiro in Brazil with Mr Abe, who has been mum on her victory so far, for the Aug 21 closing ceremony of this year's Olympic Games.

She said yesterday that she will fly business class and will not stay in a lavish suite during the trip.