North Korean leader Kim Jong Un declared his "strong will" towards denuclearisation in his annual New Year's Day address, but warned that he could "seek a new path" if the United States misjudges his patience.

"I am ready to sit down again with the US President any time and make efforts towards producing an outcome that would be welcomed by the international community," he said yesterday morning in a televised address.

Clad in a suit and tie and sitting on a plush armchair, Mr Kim said bilateral ties would propel ahead if the US were to "respond by taking trustworthy and corresponding, practical action".

If the US "misjudges our patience and forces things upon us while maintaining sanctions and pressure instead of keeping the promises it made", Mr Kim said he could be "left with no choice but to seek a new path". He did not give details.

He also urged the US to completely halt its suspended joint military exercises with ally South Korea.

In response to the news, US President Donald Trump wrote on Twitter, “I also look forward to meeting with Chairman Kim who realizes so well that North Korea possesses great economic potential!”

There was no immediate comment from the White House, Reuters reported. Asked for a reaction, a US State Department official said: “We decline the opportunity to comment.”

South Korea's presidential office yesterday welcomed Mr Kim's address, expressing the hope that his "firm commitment will have a positive effect in resolving issues on the Korean peninsula in the new year".

Little progress has been made since Mr Kim met Mr Trump in Singapore in June last year.

Nuclear talks have stalled over US insistence on sanctions until the North takes concrete actions, such as submitting a list of its nuclear weapons. The North is pushing in turn for measures from the US, like the easing of economic sanctions. 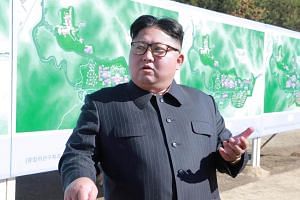 The North Korean leader's annual address is scrutinised for hints of the regime's key policy directions in the year ahead.

Experts said his softer tone this year is a stark contrast to his address last year, when he warned of a "nuclear button" on his desk. Even the setting has changed - from a formal podium to a cosy armchair set against a wooden fireplace mantel decorated with family portraits - in an apparent bid to portray Mr Kim as a modern leader.

The North Korean leader is asking Washington to take the next step to break the stalemate, such as allowing the reopening of the joint Kaesong Industrial Complex, analysts said. "Kim sent an 'olive branch' to Trump," said Dr Lee Seong-hyon of the Sejong Institute think-tank.

"Negotiations have stalled for months, raising some doubt. Kim this time is saying that negotiation is still possible, but the ball is in Washington's court."

As the US is unlikely to back down, analysts said it is up to South Korean President Moon Jae-in - who is due to welcome Mr Kim to Seoul early this year for their fourth summit - to mediate.

Professor Kim Jae-chun of Sogang University said the key could lie in Mr Moon convincing Mr Kim to take measures such as dismantling the main Yongbyon nuclear test site, for the simultaneous lifting of some sanctions.

If not, the stalemate could continue for a longer period, he added.

Xi to Trump: Cooperation best choice for US and China

UK can turn corner with Brexit vote: May

A version of this article appeared in the print edition of The Straits Times on January 02, 2019, with the headline 'Kim warns of 'new path' if stalemate with US persists'. Subscribe
Topics:
More
Whatsapp Linkedin FB Messenger Telegram Reddit WeChat Pinterest Print Purchase Article Copy permalink