"President Moon will visit the Vatican on Oct 17 and 18 to reaffirm its blessing and support for peace and stability of the Korean peninsula," the spokesman told a news briefing.

"Especially when he meets with Pope Francis, he will convey Chairman Kim's message that he will ardently welcome him if he visits Pyongyang."

Mr Kim told Mr Moon of his wish to meet the Pope during last month's summit of the two leaders, the spokesman added, without elaborating on the timing.

The Pope has said he wants to visit Japan next year.

The Vatican said in a statement that the Pope will receive Mr Moon on Oct 17.

The day before, in St Peter's Basilica, Cardinal Pietro Parolin, the Vatican's secretary of state and the Pope's second-in-command, will say a "mass for peace" on the Korean peninsula. 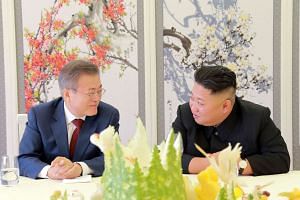 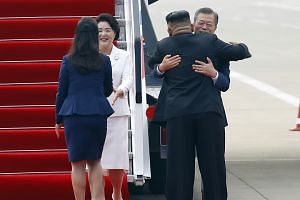 Mr Moon will attend the mass, the Vatican said.

North Korea's Constitution guarantees freedom of religion as long as it does not undermine the state, but beyond a handful of state-controlled places of worship, no open religious activity is allowed.

The invitation to the Pope is the first by a North Korean leader since 2000.

Although that meeting, proposed by Mr Kim's father, Mr Kim Jong Il, never materialised, the plan for Pope Francis to visit is the North's latest diplomatic initiative this year.

Mr Kim held an unprecedented summit with US President Donald Trump in Singapore in June, and pledged to work towards denuclearisation of the Korean peninsula.

The Trump administration is preparing for a second Trump-Kim summit.

Before they turned the page on decades of public acrimony, the leaders regularly traded threats and insults as North Korea pushed to develop a nuclear missile capable of hitting the United States.

The two Koreas held three summits this year following years of confrontation marked by the North's nuclear and missile tests.

Mr Moon's European tour, scheduled for Oct 13 to 21, is primarily to attend the Asia-Europe Meeting in Belgium and includes stops in France, Italy and Denmark, his office said.