It was the first time Mr Kim stated North Korea's position on the second US-North Korea summit in Hanoi that collapsed in February and signalled a continued focus on economic development, a strategic direction officially declared a priority last April.

On North Korea's position on the summit, Mr Kim said he would double down on efforts to create a self-supporting national economy "so as to deal a telling blow to the hostile forces who go with bloodshot eyes miscalculating that sanctions can bring (North Korea) to its knees", according to KCNA.

US-North Korean engagement has appeared to be in limbo since the Feb 27-28 summit in Hanoi. The meeting collapsed over differences about how far North Korea was willing to limit its nuclear programme and the degree of US willingness to ease economic sanctions.

Mr Kim has continued to highlight his economic push in recent weeks despite the lack of sanctions relief.

State media has published images and reports of Mr Kim's visits to at least four economic projects in five days over the past week, including a remodelled department store, tourist resorts and an economic hub near the border with China.

At a plenary session last year, Mr Kim formally announced a "new strategic line" that focused on economic progress and improving North Koreans' lives, rather than the previous two-pronged approach of economic and nuclear weapons development.

North Korea was expected to convene a session of its rubber-stamp legislature, the Supreme People's Assembly, yesterday.

In its meeting on Wednesday, the ruling party also elevated Ms Choe Son Hui, one of North Korea's leading negotiators with the US, to a position as member of the party's Central Committee.

Despite not explicitly naming the "hostile forces" that imposed sanctions, Mr Kim is displaying a more hardened stance towards Washington than was recently in state media, analysts said.

The comments were reported hours ahead of a summit between US President Donald Trump and South Korean President Moon Jae-in in Washington yesterday to discuss North Korea and other alliance issues. Mr Moon has suggested that sanctions could be eased to allow inter-Korea economic engagement in return for some nuclear concessions by North Korea, but so far, Washington has not agreed. 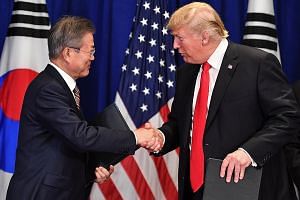 "It did not directly mention the US, but linked sanctions with hostile forces," said Mr Shin Beom-chul, a senior fellow at the Asian Institute for Policy Studies in Seoul. "(Mr Kim's) saying North Korea would take an independent course unless the US offered to lift sanctions. You maintain sanctions, you're a hostile force; if you ease sanctions, you're not."

US Secretary of State Mike Pompeo told a congressional committee on Wednesday that he would like to leave "a little room" in the sanctions in case North Korea makes "substantial" progress towards giving up its nuclear weapons.

In Hanoi, Mr Kim sought relief from major UN sanctions, but Mr Pompeo said those must stay in effect until North Korea completely denuclearises. "The enforcement regime, the core UN Security Council resolutions, need to remain in place until the verification of denuclearisation has been completed," he said.