Mr Kim is likely to raise the possibility of a peace treaty, along with establishing diplomatic relations and nuclear disarmament, during a meeting with the US leader, the Dong-A Ilbo newspaper said on Monday (March 12), citing an unidentified senior official in South Korea's presidential office.

Mr Trump last week agreed to meet Mr Kim, although key details of the summit have yet to be decided.

Professor Koh Yu Hwan, who teaches North Korean studies at Dongguk University in Seoul, said the regime has long sought a peace treaty to end the more than 60-year-old ceasefire between the two sides and help guarantee its safety.

"There were agreements between the US and North Korea to open up discussion on a peace treaty, but they never materialised," Prof Koh said, adding that the conditions were key.

Mr Trump's surprise decision last Thursday to accept a meeting with Mr Kim dispensed with decades of US foreign policy by accepting the high-stakes invitation based on a vague offer by Mr Kim to discuss giving up his nuclear weapons programme. 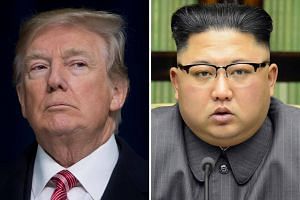 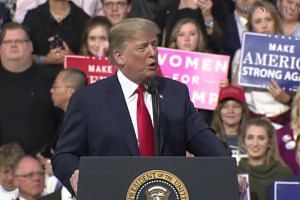 The decision drew both support from countries seeking to defuse tensions between North Korea and the US, and warnings that Mr Kim could be seeking more time to develop his weapons and reduce pressure from international sanctions.

The meeting - tentatively scheduled for May - will require a flurry of diplomacy as participants try to agree what will be discussed and where it will happen.

South Korean President Moon Jae In also accepted Mr Kim's offer to meet near their shared border later in April, a meeting in which Mr Kim was expected to suggested resuming cultural exchanges and family reunions.

The US and the South Korea are also discussing how to conduct upcoming mass military drills in a way that would not provoke Mr Kim, whose regime views the exercises as a rehearsal for war. The allies had agreed to delay the drills until after the Winter Paralympics end later this month (March).

The US was unlikely to deploy an aircraft carrier, which is considered a "strategic asset", during the drills, the Yonhap News Agency reported on Monday. The South Korean Defence Ministry declined to comment on the planned drills.