They are expected to discuss economic cooperation and denuclearisation

Mr Kim arrived in the far-eastern city of Vladivostok in his private train yesterday afternoon, after a stopover in the border town of Khasan.

Asked about the summit while in Khasan, he told Russian state television: "I hope that we can discuss concrete questions about peace negotiations on the Korean peninsula and our bilateral relations."

His three-day trip could include visits to Russia's Pacific Fleet headquarters, food factories and an aquarium popular with tourists, according to South Korean reports.

As this marks Mr Kim's first diplomatic activity since the breakdown of his February summit with US President Donald Trump, there is talk that North Korea may be adopting "pendulum diplomacy", swinging between its neighbours Russia and China to gain leverage and maximise its strategic interests.

There is also speculation that Russia could be the "new path" for the North, in line with Mr Kim's New Year's Day address stating that he could seek alternatives if the US maintained sanctions and pressure on the regime. But US experts at the Asan Plenum security forum in Seoul this week said the summit is just part of Mr Kim's wider diplomacy calculus, and he would return to dialogue with Washington when the timing is right.

The Trump-Kim summit in Hanoi - the second since they agreed to work towards complete denuclearisation at their first meeting in Singapore last June - broke down over US demands that Pyongyang offer more than just the dismantlement of its main Yongbyon nuclear facility in return for the lifting of five major sanctions. Both sides have maintained their positions, while asking the other to come up with new proposals to resume talks. 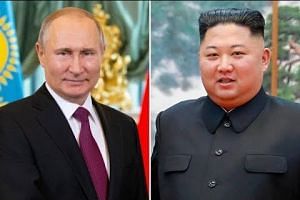 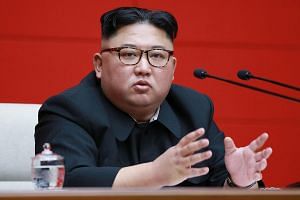 Dr Sue Mi Terry of the Centre for Strategic and International Studies said North Korea is still waiting to see if it can strike a smaller deal with the US, while working on its neighbours. "It's not that Kim has some grand plan with Russia. It's just part of his plan to continue to work on diplomacy with everybody else to put pressure on Washington," she said on the sidelines of the Asan Plenum, in response to a question from The Straits Times.

Observers said food aid and the fate of around 10,000 North Korean workers who may have to leave Russia due to sanctions banning new work visas may also be broached at the summit.

There is also speculation that the leaders will discuss economic cooperation that can include a railway project and a gas pipeline that could involve South Korea.

Mr Alexander Vershbow, a former US ambassador to Russia and South Korea, said Mr Kim may be hoping to secure Russia's support on sanctions relief and "show that North Korea has other friends".

US envoy to North Korea to visit Moscow, discuss denuclearisation

"But Russia has been a very strong supporter of sanctions and so far has not broken ranks with the US," added Mr Vershbow. "I hope Putin makes it clear that Russia is willing to support a deal if there's a deal. But first we need a deal... Kim Jong Un must get serious about denuclearisation before they can talk about railway links or gas pipelines."

Separately, a key North Korean official involved in the denuclearisation discussions, Mr Kim Yong Chol, has been removed, South Korea's Yonhap news agency reported yesterday. It did not give a reason for his removal.

A version of this article appeared in the print edition of The Straits Times on April 25, 2019, with the headline 'Kim arrives by train for summit with Putin'. Subscribe
Topics:
More
Whatsapp Linkedin FB Messenger Telegram Reddit WeChat Pinterest Print Purchase Article Copy permalink