The following are highlights of her 40-minute policy address.

The Hong Kong government has the constitutional responsibility to legislate for Article 23 of the Basic Law, which provides for tough new national security laws.

- It will try to take forward political reform. But the government will not tolerate any talk of moves towards independence from China.

- Enact legislation to implement the law of mainland China, punishing mockery of the Chinese national anthem.

- Rule of law is the most important core value of Hong Kong, and independence of the judiciary is the key to embodying the rule of law.

Any "behaviour" arising from disappointment with court verdicts is unacceptable. 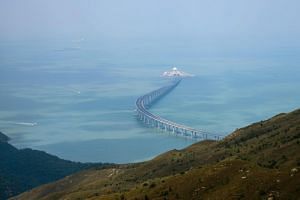 - Selling price of subsidised flats will no longer be linked to market prices of private flats but determined primarily with reference to the affordability of buyers.

- Will develop land resources despite changes in the economic environment and fluctuations in property prices.

- The government's vision for the development of Lantau island covers the development areas at artificial islands with a total area of 1,700 hectares in North Lantau and coastal areas of Tuen Mun in the northwestern New Territories.

- The development includes providing up to 400,000 residential units with 70 percent public housing, accommodating up to 1.1 million people and creating 340,000 jobs over the next 20-30 years.

International trade, financial markets and investment may be hit as trade friction between China and the United States escalates. The government will monitor changes in the economic environment, providing support for affected enterprises.

- The government will seize the opportunities brought by the Belt and Road Initiative and the Greater Bay Area development to give new impetus to the economy.

- The government will encourage development of mobile payment channels, including adoption of a common QR code standard for retail payment while promoting financial innovation.

- Plans to launch a Government Green Bond programme with a borrowing ceiling of HK$100 billion (US$12.76 billion) to promote development of green finance.

-The government will extend the period of subsidies under the mandatory provident fund scheme to reduce the impact of the so-called offsetting mechanism, which lets employers take cash from the pot to offset long-service or severance payments.