SEOUL/TOKYO (Reuters, Washington Post) – US President Donald Trump’s speech to the United Nations, where he warned he would“totally destroy” North Korea if threatened, reinforced the need for Pyongyang to realise it must give up its nuclear weapons, South Korea said on Wednesday (Sept 20).

In a hard-edged speech to the United Nations General Assembly on Tuesday, Trump mocked North Korean leader Kim Jong Un as a “rocket man” for his repeated ballistic missile tests.

“We view the speech as portraying a firm and specific stance on the key issues regarding keeping peace and safety that the international community and the United Nations are faced with,”the office of South Korean President Moon Jae In said in a statement on Wednesday.

Trump’s speech “reaffirmed that North Korea should be made to realise denuclearisation is the only way to the future through utmost sanctions and pressure”, it said.

​The greater Seoul area is home to 25 million people, almost all of whom are within artillery range.

Moon came to power in May on a platform of more engagement with North Korea. Since Pyongyang’s sixth and largest nuclear test earlier on Sept 3, however, Moon has said the time is not right for dialogue.

He and Trump plan to meet in New York early on Wednesday US time, Moon’s office said.

Trump’s most direct military threat to attack North Korea was his latest expression of concern about Pyongyang’s repeated weapons tests.

“The United States has great strength and patience, but if it is forced to defend itself or its allies, we will have no choice but to totally destroy North Korea,” Trump told the 193-member world body. “Rocket man is on a suicide mission for himself and his regime.”

US ally Japan, which Pyongyang often threatens to destroy, has taken a consistently hard line on North Korea, pushing for increased sanctions and pressure.

Suga also welcomed Trump’s reference to a Japanese girl who was kidnapped by North Korean agents in 1977.

The plight of abuctees is a key issue for Japanese Prime Minister Shinzo Abe, who has pledged to rescue them while in office, and an emotive one for the Japanese public.

North Korea admitted in 2002 it had kidnapped 13 Japanese in the 1970s and 1980s to train spies. Five of them returned to Japan but Tokyo suspects that hundreds more may have been taken. 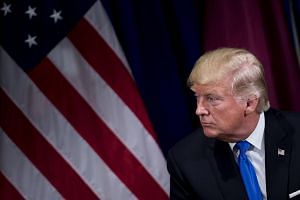 Trump's fiery UN address redefines US role in the world

North Korea, which has conducted more than 80 missile tests under third-generation leader Kim, says it needs its weapons to protect itself from US aggression.

South Korea and the United States are technically still at war with North Korea after the 1950-53 Korean conflict ended with a truce, not a peace treaty.

“We have the strictest sanctions ever put in place. We do believe there are early signs of those having an effect,” he said. “Ultimately, though, we’re going to need the assistance of the neighbours in the region.”

The UN Security Council has unanimously imposed nine rounds of sanctions on North Korea since 2006, the latest earlier this month aimed at restricting fuel supplies and cutting off textile exports, a key foreign exchange earner.

The United States has urged China, North Korea’s main ally and trading partner, and Russia to do more to rein in Kim, something Trump appeared to allude to in his speech.

“It is an outrage that some nations would not only trade with such a regime but would arm, supply and financially support a country that imperils the world with nuclear conflict,” Trump told the General Assembly.

China has yet to respond to Trump’s speech, but Foreign Minister Wang Yi told his French counterpart during a meeting in New York on Tuesday that Beijing supports a peaceful resolution to the North Korea issue and it was incorrect to say China has not done enough.

“China has always comprehensively and fully implemented Security Council resolutions on North Korea, and fully carries out its international obligations,” Wang said, according to a Chinese Foreign Ministry statement

"Today's dangerous deadlock has been the result of Pyongyang's and Washington's persistent pursuit of their own interests in disregard of other countries' efforts to persuade the two antagonists to talk," the China Daily wrote in an editorial Wednesday morning.

"His threat to 'totally destroy' (North Korea) if need be will, therefore, likely worsen the already volatile situation."

Analysts said that Trump's speech would ring alarm bells in the region.

"American rhetoric on North Korea has traditionally been quite restrained, they haven't been trying to match the North Korean rhetoric," said John Delury, an American professor of international relations at Yonsei University in Seoul.

"So there is a genuine concern here: is the Trump administration serious? Are they going to take us into the war we've avoided having since 1953?" he said, referring to the end of the Korean War.

Narushige Michishita, a Korea expert at the National Graduate Institute for Policy Studies in Tokyo, said that while the Abe government supported a hard line on North Korea, many Japanese people would also be concerned about Japan suffering during any conflict.

"The use of massive force would cause a huge amount of destruction in South Korea but Japan might also suffer," he said.

For China, the military option was "unimaginable" and "too costly," said Cui Zhiying, director of the Korean Peninsula Research Center at Tongji University in Shanghai.

"War is an unimaginable option and it should not be an option at all. It would hurt all parties, everyone on the peninsula and in the Northeast Asia region," he said. "Peaceful, diplomatic dialogue is the only way to solve this issue," he said.

Cui cautioned that military action from the United States would drag China into a difficult position as it would have no choice but react.

"China does not want to see war or chaos in North Korea," he said. "If the United States were to take military actions, China would have to react, simply because it's right on its doorstep."

In Russia, which has largely defended North Korea's interests although it supported the tightened sanctions, Trump's remarks were seen as a dangerous harbinger of instability.

Leading members of the Russian foreign policy establishment said that Trump's statements echoed his inexperience and were potentially dangerous for US allies.

"Any military conflict means deaths of civilians. It is especially odd as the US considers South Korea and Japan its allies, and they could be affected in case of a strike," Andrei Klimov, chairman of the foreign affairs committee in Russia's upper house of parliament, told the Interfax news agency in an interview on Tuesday.

While Russian officials were initially excited about Trump's readiness to overturn the international order, a promised detente with Russia has failed to materialise, while bellicose rhetoric against Russian partners such as North Korea and Iran has stepped up.

At least "unlike his predecessors, he didn't put Russia among the main threats to mankind and even praised our country for cooperating with the Security Council on North Korea," Konstantin Kosachyov, another senior member of Russia's upper house of parliament, wrote in a post on Facebook.

But Trump's speech was "disappointing," said Kosachyov, who was in New York for this week's summit, particularly for "the extremely dangerous statements about the readiness to 'totally destroy North Korea' and exit the Iran deal as 'one of the worst for the US and an embarrassment.' Plus Syria, Cuba and Venezuela as though they were the worst dictatorships in the history of mankind."