TOKYO - The path is now clear for Japan's revered Emperor Akihito to step down in favour of his elder son, Crown Prince Naruhito, after the formal passage of a one-off Bill into law by the Upper House on Friday (June 9).

The law will expire in three years and the date when Emperor Akihito, 83, hands over the Chrysanthemum Throne, though yet to be fixed, is widely expected to be in December next year.

Only posthumous succession has been allowed since the Meiji Constitution was enacted in 1889, and he will be the first monarch to abdicate since Emperor Kokaku in 1817.

The wheels were set in motion in August last year after the Emperor hinted, in an unusual public address, of his desire to step down as old age catches up with him and impedes him from performing his duties fully as "the symbol of the State and of the unity of the people".

While there was disagreement on how the Bill should be drafted - the opposition Democratic Party (DP) favoured a permanent revision - its passage was hardly in question given the Emperor's huge popularity, and after the ruling Liberal Democratic Party (LDP) stressed it would serve as a "legal precedent" for future abdications.

The parties also struck a compromise in adding a non-binding supplementary resolution last week (May 29) amid concerns of a shrinking pool of royals to perform official duties, reignited by news of Princess Mako's impending engagement. Female royals lose their status upon marriage. 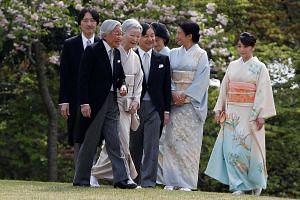 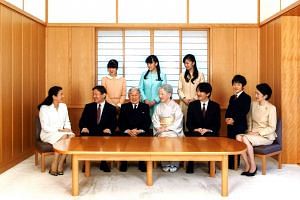 Way clear for Emperor Akihito to abdicate: 5 things to know about Japan's royals

Japan's Prince Naruhito says he is ready to become emperor

The motion reads: "Issues related to ensuring stable Imperial succession and the creation of female-led Imperial branches are important matters that cannot be postponed."

The DP wanted to fix a timeline but the LDP was reluctant given the potential fallout with its influential right-wing support base.

But it will only be a matter of time before Japan needs to confront the manifold issues rather than kick the can down the road.

First, when Princess Mako, 25, marries paralegal Kei Komuro, 25, the number of imperial family members will fall to 18 - of whom 13 are women and eight are below 40 years old. Of the eight, seven are unmarried females.

Next in line after Crown Prince Naruhito, 57, who will become the 126th monarch in the world's oldest hereditary bloodline said to date back to 660BC, is his brother Prince Akishino, 51, followed by the latter's son Hisahito, 10.

Under the Imperial Household Law, only males are allowed to ascend the throne, which means the burden of producing a male heir will fall squarely on the shoulders of the young prince and his future wife.

But the right-wing LDP has been reluctant to consider the notion of a reigning female monarch. Talks a decade ago were quickly scrapped after the birth of Hisahito.

Historian Hideya Kawanishi, an associate professor with Kobe College who is an expert on imperial family matters, told The Straits Times: "To them, the status of a man will always be higher than that of a woman, and so they see it as a must to strenuously avoid a woman acting as the country's symbol. It is simply not how they see society."

Hence, while female commoners can marry into the Imperial family - as had Emperor Akihito's wife Empress Michiko, 82 - male commoners are forbidden to do so.

Top government spokesman Yoshihide Suga said on Wednesday (June 7) that the proposal for the government to consider letting women remain in the Imperial family after marriage does not mean Japan will see female monarchs anytime soon.

"Japan should maintain a male line of succession to the Imperial throne," he stressed.

Conservative politicians including Prime Minister Shinzo Abe are said to be reluctant to let women form new branches amid concerns that this would mean their husbands and children will join the imperial family, and eventually lead to talk of allowing women or male descendants on the mother's side to assume the throne.

This is why Assoc Prof Kawanishi expects the government to grant official duties to princesses who marry out of the royal household as public servants, but stop short of retaining their status as royals.

One reason the bloodline has been threatened is the Constitution drafted after World War II, which had discontinued 11 imperial family branches as a cost-cutting measure for the then-impoverished country. Previously, female royals could also retain their status by marrying within the various branches.

While there has been talk mooting the restoration of these 11 branches, this is seen as unrealistic as the members would not know the demands of being a royal.

Further, the public would find the idea difficult to stomach, as Assoc Prof Kawanishi pointed out. "Just imagine if one day, you find out that your male neighbour or friend is to become royalty."