Earlier, US Treasury Secretary Steven Mnuchin called on the International Monetary Fund to enhance surveillance of its members' exchange rates and external imbalances, as large trade imbalances would hamper "free and fair" trade.

But Aso told the IMF's steering committee there were limits to using exchange-rate assessments to address current account imbalances for a country like Japan.

That is because the recent increases in Japan's current account surplus are driven largely by rising dividend payments and repatriation of revenues from overseas investments, instead of any boost to exports from a weak yen.

"In cases where 'excessive' imbalances exist, they should be addressed by a package of macroeconomic and structural policy measures," Aso said in a speech to the International Monetary and Financial Committee. 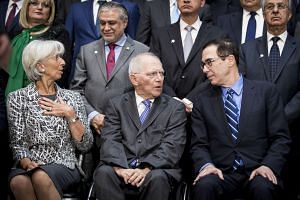 "Adjustment through changes in the exchange rate is not necessarily required," he said.

US President Donald Trump has criticised countries like Japan, Germany and China for running large trade surpluses with the United States and weakening their currencies to gain an unfair trade advantage.

Japanese policymakers fear the Trump administration may accuse the Bank of Japan of using ultra-loose monetary policy to weaken the yen and bind Tokyo's hands on currency intervention to address any unwelcome spike in the yen.

"With downside risks and uncertainty persisting, the stability of financial and exchange rate markets is especially important," Aso said.

"Excess volatility and disorderly movements in exchange rates can have adverse implications for economic and financial stability," he added, referring to language in the Group of 20 agreement that Tokyo cites as giving it room to intervene in the currency market to stem sharp yen gains.