Ultra-nationalistic groups want a remilitarised Japan, but critics worry this could lead to a slippery slope

As Japan marks the 70th anniversary of its pacifist Constitution with a public holiday tomorrow, a right-wing group will fan out across the country in full force.

The Nippon Kaigi, which has made no secret of its desire for a remilitarised Japan and counts among its brethren Prime Minister Shinzo Abe, is holding at least 40 public forums.

The group is taking aim at the war-renouncing Article 9 of the United States-penned pacifist Constitution, which ultra-nationalists claim renders Japan's Self-Defence Forces toothless, despite a recent reinterpretation of the law to allow Japanese troops to use their arms to defend its allies.

Article 9 states: "The Japanese people forever renounce war as a sovereign right of the nation and the threat or use of force as means of settling international disputes."

While North Korea's recent steady barrage of ballistic missile tests has strengthened the case for Tokyo to shore up its defences with offensive weapons, the growing influence of right-wing groups such as Nippon Kaigi in recent years has caused disquiet within Japan, as well as in the region, where wartime wounds still run deep. China's growing assertiveness, observers say, is feeding the paranoia. 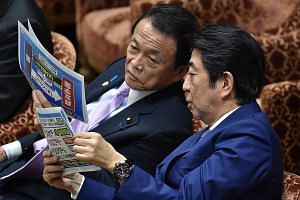 Diet members from the ruling coalition bloc of Mr Abe's Liberal Democratic Party (LDP) and Komeito are due to attend Nippon Kaigi panel sessions tomorrow, to discuss how best the ruling bloc can leverage on its unprecedented super majority in both Houses to revise the supreme law - in particular Article 9.

But doing so will still require a majority vote in a referendum, and recent surveys show public opinion remains divided over Article 9.

Nippon Kaigi's chairman Tadae Takubo has said this is the LDP's "best chance", while Mr Yoshimitsu Kobayashi of the lobby group Japan Association of Corporate Executives said last month that Japan has been "in a stupor of peace".

There are concerns among observers and Japanese alike that revising Article 9 could be the start of a slippery slope and turn Japan back to its militarist past. The idea of Japan renouncing pacifism remains largely anathema in a country whose people have come to embrace peace - including the revered Emperor Akihito, who has expressed remorse over Japan's wartime action.

Furthermore, controversies involving right-wingers, emboldened by their political dalliance, have stirred public unease. They include hate speech by the owner of the APA Group of hotels and, more recently, a sweetheart land scandal that ensnared Mr Abe and his wife.

Mr Yasunori Kagoike, president of the Moritomo Gakuen group, testified in Parliament in March that Mrs Abe handed him one million yen (S$12,500), saying it was from her husband. The group also secured a huge discount on public land for a new school. Mr Abe and the government have denied any wrongdoing.

Moritomo was known for making its pupils, some as young as four years old, bow to portraits of the emperor and recite daily an 1890 imperial edict that would indoctrinate millions of Japanese into war. While the 315-word edict, which Japan abolished in 1948, champions traits like filial piety, it also behoves pupils to "offer themselves courageously to the state, should emergency arise".

But Mr Abe, without citing Moritomo, last month said the edict can be used in schools, so long as it is "under careful consideration so that it does not violate the Constitution and the basic education law".

This comes as Japan aims to progressively make moral education a compulsory subject to instil in students values such as "love of country and homeland", while an Asahi Shimbun editorial warned that the rescript could lead to tacit consent of its use in the subject.

Mr Abe himself has publicly expressed his goal to amend Article 9 to fulfil the wishes of his maternal grandfather and former prime minister Nobusuke Kishi.

Mr Kishi, a founding leader of the LDP who made constitutional revision a party objective, had been jailed as a Class A war criminal suspect for, among other things, his role in ordering the attack on Pearl Harbour in World War II, which had propelled the US into the war.

Now that LDP's rules have been revised to allow the party leader a third consecutive term, until 2021, the 62-year-old political scion will get more time to advance his agenda.

Sophia University political scientist Koichi Nakano told The Straits Times the right-wing movement is an "elite-driven process" that has only gotten bolder as Mr Abe is more ensconced in power.

"Although they are in the minority, the right-wing movement has gotten bolder and it is a wake-up call to more people who, until now, have chosen to look the other way, and not really noticed."

Right-wing extremists regularly hire vehicles that drive around the government buildings in Tokyo's Kasumigaseki district, playing imperial tunes and accusing politicians of being too soft on China and South Korea. And, to the chagrin of Japan's neighbours, lawmakers and ministers have kept up pilgrimages to the Yasukuni Shrine, where 14 Class A war criminals are enshrined.

Relations with China and South Korea plunged to a new low when Mr Abe himself visited the shrine on the first anniversary of his second term in December 2013, the first Japanese prime minister to do so in more than seven years. He has since avoided personally visiting the shrine, though he still sends ritual offerings in his name.

Dr Jeffrey Kingston, director of Asian studies at Temple University, Japan, said the shrine "represents an unrepentant stance regarding Japan's colonialism and warmongering, where the inglorious past is glorified. Visits there trample on the dignity of the millions of Asians who suffered from imperialism".

Other incidents have deepened concerns. Japan recently said it will tolerate the use of dictator Adolf Hitler's autobiography Mein Kampf in classrooms so long as it does not promote racial discrimination, triggering protests from China.

Also, the Education Ministry has incorporated jukendo - a Japanese martial art of bayonet fighting that was part of militaristic education - in junior high schools. And in March, Japan commissioned its second helicopter destroyer, naming it after the Imperial Japanese navy's Kaga - a full-fledged aircraft carrier that was once the world's largest.

Commenting on the developments, the China Daily newspaper said: "When all these seemingly trivial dots are joined together, a pattern emerges."

Meanwhile, liberal and conservative critics in Japan were united in their belief that such developments were troubling. The liberal Asahi Shimbun said it was " not compatible with the principle of popular sovereignty that is provided in the Constitution".

The conservative Yomiuri Shimbun, in a rare attack on the LDP, said: "It is clear that a national view centred around the emperor cannot be viable under the current Constitution."