TOKYO (AFP) - A Japanese official at the heart of a cronyism and cover-up scandal that has dented Mr Shinzo Abe's popularity said on Tuesday (March 27) that the prime minister's office was not involved in falsifying documents.

He said neither Mr Abe nor his Cabinet Secretary or Finance Minister had ordered the alterations.

Mr Sagawa's testimony came as fresh polls showed public support for Mr Abe's government plunging by double digits, apparently due to the scandal, amid opposition calls for the prime minister to resign.

However, the official declined to answer detailed questioning about how and when documents were altered, saying he was under criminal investigation.

The scandal revolves around the 2016 cut-price sale of state-owned land to nationalist school operator Moritomo Gakuen which claims ties to Mr Abe and his wife Akie.

The row deepened when the Finance Ministry admitted official records of the sale were altered, with references to Mr Abe, his wife, and Finance Minister Taro Aso scrubbed.

Mr Abe has apologised repeatedly, but denies any wrongdoing.

On Monday, he pledged a "thorough investigation so that everything can come to light".

Mr Sagawa was head of the Finance Ministry department that oversaw the sale in 2016, and was promoted to head Japan's tax agency the following year.

As the scandal made national headlines, he stepped down, and the opposition has sought repeatedly to bring him before parliament to testify. 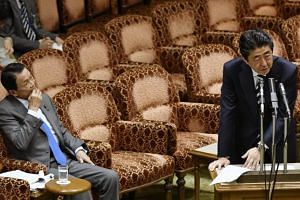 Several times last year (2017), Mr Sagawa told MPs that the price of the land "was properly calculated" and stressed there was no evidence of political pressure in the sale.

Official documents relating to the sale were apparently altered to make them consistent with his testimony, according to the Finance Minister.

Mr Sagawa's testimony on Tuesday was the first time he has been officially summoned to address parliament under oath.

A career bureaucrat who began working at the Finance Ministry in 1982, Mr Sagawa stepped down earlier this month (March), with some experts saying Mr Abe's government hoped the resignation would draw a line under the scandal.

But the opposition has continued to press Mr Abe and his Cabinet to take responsibility for the scandal, as well as pushing for Mrs Abe to testify to parliament - a request the premier's ruling party has so far rejected.

The opposition says Mr Sagawa's testimony "is only a first step towards revealing the whole truth" about the scandal.

The affair took a tragic turn earlier in the month when an official from the Finance Ministry apparently involved in the scandal took his own life.

The row has battered Mr Abe's popularity and called into question whether he can still win a party leadership contest this September and become Japan's longest-serving prime minister.

His approval rating plunged by 14 percentage points to 42 per cent this month, according to a survey published on Monday by the business daily Nikkei, with his disapproval rating at 49 per cent.