TOKYO (REUTERS) - Japanese Finance Minister Taro Aso will not attend the Group of 20 finance leaders' meeting in Buenos Aires next week due to parliamentary wrangling over altered documents in a suspected favouritism scandal, a ruling party source told Reuters.

Aso instead will attend a debate in parliament on Monday (March 19) about the scandal involving the controversial sale of public land to a school operator with ties to the Prime Minister Shinzo Abe's wife.

Aso has come under fire since his ministry's admission this week that it had altered records involved in the heavily discounted sale of land to school operator Moritomo Gakuen.

References to Abe, his wife, Akie Abe, and Aso were removed from the finance ministry's records of the sale, copies of documents released by the ministry showed.

Abe, who is hoping to win a third term as party leader later this year, has remained steadfast that he and the first lady were not involved in the land sale.

Suspicion of a cover-up could slash Abe's ratings and undermine his chances in the LDP September leadership vote. If successful he would become Japan's longest-serving premier.

Officials told Reuters earlier this week that Aso was considering skipping the G20 meeting amid the fallout from the scandal, which has paralysed parliamentary proceedings and has opposition leaders calling for Aso's resignation.

Aso has rejected calls to resign and said responsibility for the land sale lied with Nobihisa Sagawa, who stepped down as tax chief on Friday last week.

Sagawa headed the finance ministry division that submitted the documents before he became tax agency chief in July. 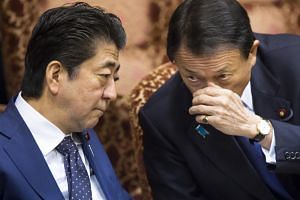 On Thursday (March 15) , the Asahi newspaper reported the Land and Transport Ministry told the prime minister’s office and the finance ministry on March 5 that they had the unaltered documents – three days before the finance ministry presented to parliament what it said were copies of the original documents.

The scandal has already caused a stalemate in parliament with opposition parties threatening to boycott debate on the budget. The logjam could also leave two Bank of Japan deputy governor posts vacant when the incumbents' terms end next week, as the appointments need lawmakers' approval.