One may have been as young as 15; victims not just from Tokyo's immediate regions

TOKYO • Japanese broadcaster NHK reported yesterday that at least three of the nine victims who were hacked by serial killer Takahiro Shiraishi were high school students. One may have been as young as 15.

Shiraishi, 27, was arrested last week after officers made the gruesome discovery of nine dismembered bodies in his apartment in Kanagawa prefecture's Zama city, located south-west of Tokyo.

He has confessed to killing almost all of his victims - eight women and a man - over a two-month spree after contacting them via Twitter.

Media reports said Shiraishi had used Twitter to prey on young girls who wanted to take their own lives, saying he would help them with their suicide plans.

Police were led to him while investigating the disappearance of one of his victims, a 23-year-old woman from Tokyo's Hachioji suburb, who had been reported as missing by her brother.

NHK yesterday reported that the three high-school victims came from the prefectures of Saitama, Fukushima and Gunma.

Fukushima and Gunma are located far from Tokyo, suggesting that his victims were not just from Tokyo's immediate regions.

The report also quoted him as telling the police that none of the eight women he met, who had told him they wanted to kill themselves on Twitter, really had the intention to die. Police believe the only man among his victims was likely to be a boyfriend of one of the women killed.

The report also quoted him as telling the police that none of the eight women he met, who had told him they wanted to kill themselves on Twitter, really had the intention to die. Police believe the only man among his victims was likely to be a boyfriend of one of the women killed. 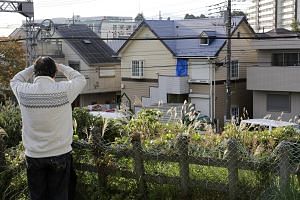 According to police, Shiraishi sent messages to his victims on Twitter saying he wanted to "die together" with them.

But he would instead give them alcohol, tranquillisers and sleeping pills before assaulting them.

Yesterday, police said Shiraishi, who had deleted some of the tweets to cover up his crimes, admitted that he had lied about wanting to kill himself.

Investigators are now trying to identify his victims from the personal belongings that were found in his apartment and Global Positioning System records from their mobile phones.

Shiraishi was said to have told police that he dismembered the bodies in his bathroom, where officers found traces of blood.

He disposed of his victims' flesh with the trash, and then sprinkled cat litter over the remains in an effort to cover up the evidence.

Body parts have also been found stored in cooler boxes in his apartment.

Meanwhile, the Mainichi newspaper reported yesterday that Shiraishi likely met a woman, who was intended to be his next victim, just a day after he killed the woman from Hachioji on Oct 23.

Sources cited by the paper said he met the woman, whom he had also contacted through Twitter, at Tokyo's Machida Station and the two had dinner together.

The woman, who was unharmed, had discussed going to his apartment together with him to kill themselves.

But she backed out after doubting Shiraishi's claim that he had tried and failed to hang himself, as there were no visible marks on his neck.