TOKYO (REUTERS) - Japanese Prime Minister Shinzo Abe was set to reshuffle his Cabinet on Tuesday (Oct 2) but he was expected to keep key ministers in their posts, including finance, foreign affairs and the economy minister who has handled trade talks with the United States.

Mr Abe was re-elected as leader of his Liberal Democratic Party (LDP) last month, putting him on track to become Japan's longest-serving premier.

Mr Abe's reshuffle appeared to focus on stability as he prepares to push through a controversial proposal to revise the post-war, pacifist constitution, political experts said.

He has said he wanted to retain allies in Deputy Prime Minister Taro Aso, who doubles as finance minister, and Chief Cabinet Minister Yoshihide Suga.

Close ally Akira Amari, a former economics minister who resigned over a funding scandal in 2016, will likely become LDP executive in charge of election strategy ahead of critical upper house elections next year, the reports said.

Mr Abe's administration suffered a blow when an opposition-backed politician defeated a rival heavily supported by Mr Abe's ruling bloc in Sunday's election for governor of Japan's southern island of Okinawa, host to the bulk of US military forces in Japan. 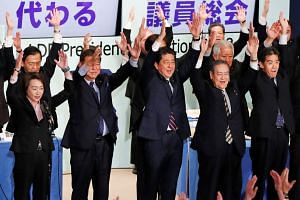 Abe suffers Okinawa election defeat over new US base

The winner, Mr Denny Tamaki, opposes a US-Japan plan to relocate the US Marines' Futenma air base to a less populated part of Okinawa and wants the facility moved off the island.

Mr Abe has made clear that he wants to forge ahead with his politically divisive plan to amend the constitution's Article 9 to clarify the ambiguous status of its military, known as the Self-Defence Forces (SDF).

But his immediate challenges are to manage fractious trade ties with Washington and keep an economic recovery on track.

Business confidence among Japan's big manufacturers worsened in the September quarter to hit the lowest level in nearly a year, a closely watched central bank survey showed on Monday, as firms felt the pinch from rising raw material costs and a string of natural disasters that disrupted production.

Last week, Mr Abe and US President Donald Trump agreed to open new talks on a bilateral trade agreement and that Washington would refrain from raising tariffs on Japanese car exports for now, but Trump could revive the threat if progress is slow.

Mr Abe was also likely to appoint former finance ministry official Satsuki Katayama, a conservative LDP lawmaker, as minister in charge of local economic revitalisation. The Asahi newspaper corrected its earlier report that she would be tapped as health, welfare and labour minister.