ABOARD THE KAGA, Indian Ocean (REUTERS) - Japan's biggest warship, the Kaga helicopter carrier, joined naval drills with Britain's HMS Argyll in the Indian Ocean on Wednesday (Sept 26) as the frigate headed towards the contested South China Sea and East Asia.

Britain, Japan and their close ally the United States have found common cause in countering growing Chinese influence in the region that they worry could put key commercial sea lanes linking Asia with Europe, the United States and elsewhere under Beijing's sway.

"We have traditional ties with the British navy and we are both close US allies and these drills are an opportunity for us to strengthen cooperation," Kenji Sakaguchi, the Maritime Self Defence Force (MSDF) commander of the Kaga group's four helicopters said on the hangar deck.

The more frequent presence of the Royal Navy in a region is a chance for the two navies to train more closely in the future, he added.

The Argyll, Kaga and its destroyer escort the Inazuma practised formations on calm seas in the Indian Ocean close to commercial sea lanes plied by container vessels and oil tankers. Three helicopters from the Japanese carrier hovered above, monitoring the drill.

The Argyll's arrival in the region comes after Britain's amphibious assault ship HMS Albion, last month challenged Beijing's territorial claims in the South China Sea on its way to Vietnam from Japan by sailing close to Chinese bases in the Paracel islands in a freedom of navigation operation (FONOP).

China dispatched a warship and helicopters to counter the British presence and warned London that similar actions in the future could endanger talks for a possible trade deal that Britain is seeking as it prepares to leave the European Union.

China, which says its intentions are peaceful, claims most of the South China, through which some US$3 trillion (S$4.1 trillion) of seaborne trade passes every year. Malaysia, Vietnam, the Philippines and Brunei also claim parts of the sea, which has oil and gas deposits as well as rich fishing grounds.

Japan, which is embroiled in separate territorial dispute with China in the neighbouring East China Sea, has yet to conduct a FONOP in the south China Sea. 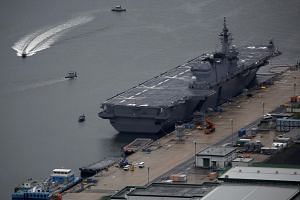 However, in a rare public announcement this month, Japan's Ministry of Defence said one of its submarines had carried out a naval exercise in the disputed waterway with two Japanese destroyers and the Kaga, which is on a two-month deployment in the Indo-Pacific.

After crossing the South China Sea, the Argyll will operate in waters around Japan, including a stint monitoring sanctions imposed on North Korea by the United Nations to force it to abandon nuclear weapons and ballistic missiles, said a British government source, who asked not to be identified because he is not authorised to talk to the media.

The Argyll is the third Royal Navy ship in Asia's waters this year following the tour of the Albion and another frigate.

"Normally we hold discussion with other countries before joint drills, but with the British there is no need to, so they are easy to work with," said Tatsuhiko Mizuno, an operation planning officer for the Kaga group.