TOKYO (AFP, BLOOMBERG) - Not a single drop of Japanese beer was exported to South Korea last month, according to official figures on Thursday (Nov 28), as a boycott campaign against Japan over a historical dispute dries up demand.

Japanese beer shipments to South Korea stood at 7.9 billion yen (S$98 million) last year, accounting for more than 60 per cent of the country’s global exports of the amber nectar.

But the Finance Ministry in Tokyo said exports had plunged to zero, as the two countries remain locked in a dispute over trade and Japanese wartime atrocities.

Already in September, year-on-year exports had fallen 99 per cent, dealing a blow to Japanese brewers such as Kirin, Asahi and Sapporo.

A Kirin Holdings spokesman declined to comment, saying only: “We are watching developments.”

Exports of Japanese instant noodles and sake to South Korea have also plummeted.

Boycotts of Japanese brands by South Korean consumers have also hit other companies, including Fast Retailing’s Uniqlo and the country's carmakers.

This infuriated Tokyo, with Japan insisting the matter was settled in a 1965 treaty normalising diplomatic relations between the two countries, which included significant reparations. 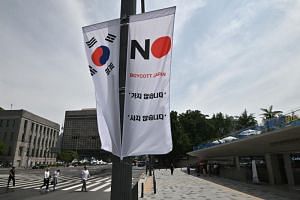 No more for me: South Korean beer imports from Japan plunge 97 per cent

The historic dispute morphed into a trade spat between the two market economies, as Japan removed South Korea from a so-called "white list" of countries that enjoyed streamlined export control procedures.

South Korea hit back with similar trade restrictions and a decision to scrap an intelligence-sharing pact, surprising analysts who thought defence ties would be immune from the diplomatic row.

Last week, however, South Korea decided against scrapping the military pact, in an 11th-hour U-turn, and the two countries agreed to hold a summit in China next month.