TOKYO • Japan yesterday launched an unprecedented probe into gender discrimination at all the nation's medical universities after a Tokyo medical school admitted altering the entrance test results of female applicants to exclude them.

The Education Ministry has asked all 81 private and public medical schools to check their admission procedures for possible discrimination against female applicants.

The authorities said they would also check the gender ratio of successful applicants for the past six months, confirming it was the first such nationwide investigation.

"If their answers are judged as not reasonable, we will ask additional questions or visit them directly," a ministry official said, adding that the results of the probe would be published as early as next month.

The probe came after a Tokyo medical school admitted it routinely altered entrance test scores for female applicants to keep women out, in a scandal that has sparked outrage in Japan.

The alterations at Tokyo Medical University reportedly stretched back as far as 2006 and apparently were aimed at keeping the proportion of women in the school at 30 per cent or lower.

I'm glad that the university's scandal came to light because, I believe, it opened a Pandora's box.

DR KYOKO TANEBE, an obstetrician and the head of Ladies' Clinic We! Toyama in Toyama prefecture.

The scandal was uncovered by investigators looking into claims that the university padded the scores of an Education Ministry bureaucrat's son to help him gain admission.

According to local media, other instances had been discovered where individual entrance-test scores were revised upwards, suggesting potential favouritism. The scores for female applicants, however, were lowered across the board.

Sources told local media the discrimination was the result of a view that women would not be reliable doctors after graduation as they often quit to marry and start a family. 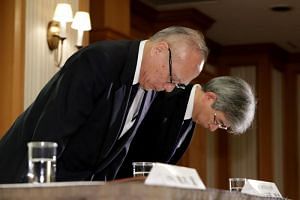 Japan continues to be hit by discrimination scandals despite inclusivity pledge

"No matter what the situation is, women should never be discriminated against unfairly," Jiji Press cited Justice Minister Yoko Kamikawa as saying.

Japan's notoriously long work hours and a male-dominated business culture force many women out of the workplace when they start families.

The Japan Times newspaper reported that the scandal did not come as a surprise to many women doctors.

"We heard rumours a number of times that medical universities were placing caps on the number of female students," Dr Ruriko Tsushima, an obstetrician and the head of Tsushima Ruriko Women's Life Clinic Ginza in Tokyo, told Japan Times. "Such practices should not be forgiven."

Dr Kyoko Tanebe, an obstetrician and the head of Ladies' Clinic We! Toyama in Toyama prefecture, said the issue is not that women tend to take leave, but that doctors are overworked.

"They are putting the blame on women. But the problem is medical institutions that cannot change the way doctors work," she told Japan Times. "I'm glad that the university's scandal came to light because, I believe, it opened a Pandora's box."