TOKYO (REUTERS) - Japan will next week pick a US-made advanced radar for its multi-billion dollar missile defence system, an upgrade that could help ease trade friction with Washington and provide cutting-edge protection against the arsenals of North Korea and China, sources said.

"Aegis will be a big-ticket purchase; it will be a nice gift for President Trump," said a Japanese government official, referring to the ground-based Aegis Ashore system.

Japanese officials could make their radar choice as early as Monday (July 2) for two Aegis Ashore batteries it wants to deploy in 2023.

That means the purchase can be added to a defence budget proposal slated for release in August, three sources with knowledge of the plan told Reuters, declining to be identified because they are not authorised to speak to the media.

Japan had sought the SPY-6 when it agreed to buy Aegis Ashore last year, but Washington was reluctant to supply it. 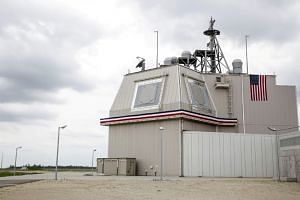 The People's Liberation Army Rocket Force controls an arsenal of hundreds of ballistic missiles that could reach Japan. Upgrades to Japan's missile defences system would make it one of the world's most advanced.

Japanese defence officials have estimated the cost of the two Aegis Ashore batteries at about US$2 billion (S$2.73 billion).

The final tally, including the SPY-6 or LRDR, which can detect targets several times farther away than existing Aegis systems operated by Japan or the US, could be at least twice that, the sources said.

In a visit to Tokyo in November, he welcomed Japan's procurement of F-35 stealth fighters and urged Japan to buy more US weapons and goods.

Mr Trump has since cranked up pressure on Tokyo with tariffs on steel, threats of levies on car imports and calls for a bilateral trade deal between the two countries.

At a joint news conference with Japanese Prime Minister Shinzo Abe in June, Mr Trump said Mr Abe had pledged to buy "billions and billions of dollars of additional products of all kinds".

He declined to say what the two leaders would discuss.

The SPY-6 radar is designed for the US navy's fleet of Aegis-equipped warships.

The LRDR will be integrated into the US Ground-Based Midcourse Defence anti-ballistic missile system in Alaska by 2020.

Both cutting-edge radars will allow Japan to make full use of new longer-range interceptors and could be used to defend against any future threat posed by Chinese missiles.

Japan's military procurement proposals for the year starting April 1 come on the heels of Mr Kim's pledge in Singapore to work toward denuclearisation of the Korean peninsula.

Japan, which hosts about 50,000 US military personnel, including the biggest overseas concentration of US Marines and a US navy carrier strike group, has said it would not change its military posture until it see concrete signs that Pyongyang is prepared to permanently dismantle its nuclear weapons and ballistic missile programmes.

"Aegis Ashore will go ahead because Japan needs it," one of the sources said.