The planned hunts, while small and far from internationally protected waters, have also sparked anger in countries where whaling is considered outdated and harmful.

But in Japan, whaling communities hailed the return of the practice, with Tokyo defending it as a tradition that should not be subject to outside interference.

The whaling issue has long been a diplomatic headache for Japan, which came under attack for exploiting an IWC loophole to hunt whales for "scientific" purposes.

Critics accused Japan of effectively carrying out stealth whaling, saying the hunts had no scientific value, while Tokyo continued to push for permission to resume commercial whaling outright.

But last year, it announced it would withdraw from the IWC and no longer comply with its decades-old ban on commercial killing of the ocean giants.

The decision takes effect today, when a flotilla of ships that once carried out whaling for "scientific research" will set sail from Shimonoseki port in western Japan.

Elsewhere, five small whaling boats gathered in Kushiro in Hokkaido, in the north, and will start hunting minke whales for about a week in a symbolic event celebrating the resumption of the practice.

"We are very excited at the resumption of commercial whaling," Mr Yoshifumi Kai, head of the Japan Small-Type Whaling Association, told Agence France-Presse ahead of the ships' departure. "My heart is full of hope." 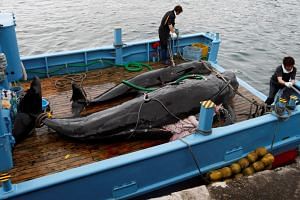 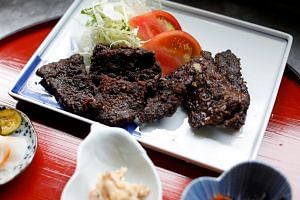 Raw, fried or on a bun: Japan's whale meat proponents reassured by restart of commercial whaling

Japan's decision last December to withdraw from the IWC sparked a firestorm of criticism from environmentalists and anti-whaling countries such as Australia, New Zealand and Canada.

It came after years of failed attempts by Tokyo to convince the IWC to allow it to resume commercial whaling, arguing that stocks of certain species are now sufficient to support renewed hunting.

The decision means Japan will end its most provocative expeditions, in protected Antarctic waters, and instead concentrate on commercial whaling of minke and other whales off its shores.

Japan has hunted whales for centuries and the meat was a key source of protein in the immediate post-World War II years when the country was desperately poor.

But consumption of whale meat has declined significantly in recent decades, with much of the population saying they rarely or never eat it, and activists have pressed Japan to ditch the practice.

Animal conservation groups from across the world sent a letter to the Group of 20 leaders meeting in Osaka at the weekend urging them to call for an "immediate end to all commercial whaling".

"Japan leaving the IWC and defying international law to pursue its commercial whaling ambitions is renegade, retrograde and myopic," said Ms Kitty Block, president of the Humane Society International, which is based in Britain.

Tokyo is "undermining its reputation for an industry whose days are so clearly numbered, to produce a product for which demand has plummeted", she said.

But some conservationists and experts say Japan's whaling industry is already on its last legs for economic reasons, with consumption shrinking steadily and no sign of a market recovery.

"What we are seeing is the beginning of the end of Japanese whaling," said Mr Patrick Ramage, director of marine conservation at the International Fund for Animal Welfare. "Japan is quitting high-seas whaling... not yet a full stop, but that is a huge step towards the end of killing whales for their meat and other products," he added.

Mr Ramage also said he does not believe coastal whaling will survive, given dwindling subsidies and consumer demand.

Mr Masayuki Komatsu, who was a top Japanese negotiator at the IWC between 1991 and 2004, said Tokyo should return to the organisation or risk seeing whaling die out altogether. Compared with research whaling programmes in the Antarctic and the northern Pacific, "the size of coastal whaling is tiny", he said.

A version of this article appeared in the print edition of The Straits Times on July 01, 2019, with the headline 'Japan sails into controversy as it resumes commercial whaling'. Subscribe
Topics:
More
Whatsapp Linkedin FB Messenger Telegram Reddit WeChat Pinterest Print Copy permalink