TOKYO (BLOOMBERG) - Japanese Finance Minister Taro Aso said tariffs were among the measures Japan could take against South Korea if a dispute among the major trading partners worsens over Koreans conscripted as labour during Japan's colonial rule.

Aso said in response to a lawmaker's questions in parliament that matters had not reached that stage yet, but halting remittances or stopping visa issuance could also be considered if more damage were to be caused.

His comments came after the Sankei newspaper of Japan reported Sunday that South Korean lawyers were considering trying to seize the assets of Japanese companies in Europe.

Fractious ties between the two countries have turned hostile over a series of lawsuits filed against Japanese companies whose roots can be traced back to 1910-1945 period when Japan controlled the Korean Peninsula.

Japan says all claims relating to the colonial period were settled under a 1965 treaty that normalised ties, which was accompanied by a payment of US$300 million, and that South Korea should be responsible for any compensation.

"There are various possible retaliatory measures, but I think negotiations are going on and we have not reached that point," Aso said.

"If things progress and there is more damage, we will be at a different stage." 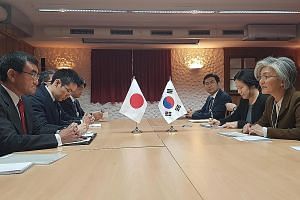 Japan-South Korea feud deepens as Trump sits on the sidelines

South Korean President Moon Jae-in has said the 1965 treaty between the two countries doesn't prevent Koreans from suing Japanese firms and the decisions of the courts should be respected.

The Supreme Court in Seoul ruled in November that Mitsubishi Heavy Industries Ltd. must pay between 100 million won and 150 million won (S$120,000 to S$180,000) to each of five plaintiffs who were forced to work in a military factory, a month after finding Nippon Steel & Sumitomo Metal Corp. liable in a similar case.

There are more than a dozen other lawsuits in the pipeline, affecting about 70 Japanese companies, according to Japan's Ministry of Foreign Affairs.

Jiji news of Japan reported at the weekend that tariffs on about 100 South Korean products, cutting the supply of some Japanese goods to South Korea, and tightening visa issuance were among the measures Japan was considering if South Korea sells assets of Japanese companies that have been seized during the dispute.

Other sources of mutual suspicion between Asia's second and third-largest economies include a disagreement over the treatment of Korean women trafficked to Japanese imperial military brothels during the annexation and, more recently, accusations of reckless behaviour by both countries' navies.