TOKYO (BLOOMBERG) - About six months after facing calls to resign, Japanese Prime Minister Shinzo Abe finds himself in a relatively strong position ahead of a year with key challenges at home and abroad.

While his popularity has fallen from peak levels in 2013, recently he's seen a bump: A January poll by public broadcaster NHK put his disapproval rating at the lowest in almost a year.

With no serious challenger to his power emerging from his Liberal Democratic Party (LDP) or from the opposition, Mr Abe is set to be Japan's longest-serving prime minister if he remains in office until November.

In a new parliamentary session starting on Monday (Jan 28), Mr Abe will look to build momentum for an unpopular sales tax set for implementation later this year, all while preparing his ruling coalition to keep its majority in a July upper house election.

At the same time, he faces the threat of more tariffs from United States President Donald Trump's administration and a wider spat with neighbour South Korea over World War II-era forced labour claims.

"We can't take it easy," Mr Tomomi Inada, chief deputy secretary-general of Mr Abe's ruling LDP, said in an interview about the upcoming upper house election. "We don't know what might happen in the parliamentary session."

Parliament in Japan presents some unique political challenges, in that the gatherings can suck up most of the administration's time. Mr Abe and his ministers must attend televised committee sessions and answer questions from lawmakers for hours on end. 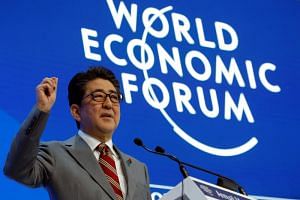 The opposition is likely to use the current session to hammer the government over slipshod data collection on government statistics, which forced his administration to amend the budget this month.

They could also whip up public sentiment against the planned tax hike in October.

Raising the unpopular levy - which the government has done twice since it was introduced in 1989 - has sent the economy into reverse and incited political revolts.

The tax hike could slam the brakes on domestic spending, hurting the economy while it faces pressure from a global slowdown.

To help sell the plan, Mr Abe has said it would fund generous social security policies for young families - part of his efforts to spur population growth in the world's fastest-ageing country.

Since his unexpected return to power in 2012 after an abbreviated first stint as premier, his signature "Abenomics" programme mostly coincided with a global upswing that has helped the country break out of a decades-long deflationary malaise, fuelled corporate profits and supported the stock market.

Mr Abe acknowledged the need to allay concerns over the tax at the World Economic Forum this month. A poll by the Sankei newspaper showed 74 per cent of respondents were uneasy about its effect on the economy.

"At this point, I think we have an economic environment where we can raise the sales tax, but we want to make that even more certain in the run-up to October," Mr Abe told an audience after giving a speech at Davos in which he touted policies he has introduced to cope with an ageing population.

Other challenges also await Mr Abe this year, including the abdication of Emperor Akihito at the end of April, followed by the enthronement of his son and Japan's hosting of a Group of 20 summit in June.

So far, diplomatic headaches - including an increasingly hostile relationship with fellow US ally South Korea and a failure to achieve progress on a territorial dispute with Russia - don't appear to have hurt Mr Abe's support.

Prof Harukata Takenaka, a professor of politics at the National Graduate Institute for Policy Studies in Tokyo, said he did not expect Mr Abe to suffer serious losses in the July election because the opposition is still divided.

Mr Abe's third consecutive term as LDP leader doesn't end until September 2021, and in the longer term, much depends how skillfully he times the next general election, Prof Takenaka told reporters this month.

"If I were prime minister, I would call the general election after the 2020 Olympics" in Tokyo, he said.

"Then he could claim to have made Japan great again, win the general election, and the possibility might emerge of staying on for a fourth term as LDP president."