He was scheduled to take a helicopter ride to view the devastation in Atsuma, a small rural town which has seen most of the deaths caused by the quake.

A cluster of dwellings in the town were wrecked when a hillside collapsed from the force of the quake, creating deep brown scars in the landscape.

His visit comes as search-and-rescue operations continue around the clock to find two missing individuals.

The Hokkaido government said the death toll now stood at 37, with one person yet to be officially pronounced dead by a medical professional.

"There is on-and-off rain at Atsuma. The work is continuing to look for the missing persons," a regional disaster management official told AFP. 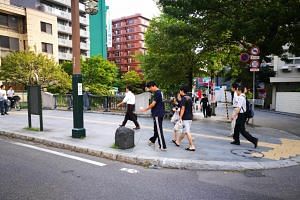 Singaporean in Hokkaido helps translate information on quake after the shock

The central government has dispatched thousands of rescue workers, including Self-Defence Forces, to look for the missing pair with the aid of bulldozers, sniffer dogs and helicopters.

Power has been nearly restored but officials are asking local residents and businesses to save energy, particularly after the weekend, as electricity supplies remain unstable.

The quake was the latest in a string of natural disasters to batter the island nation.

Western parts of the country are still recovering from the most powerful typhoon to strike Japan in a quarter of a century, which claimed 11 lives and shut down the main regional airport.

Japan sits on the Pacific "Ring of Fire" where many of the world's earthquakes and volcanic eruptions are recorded.

On March 11, 2011, a devastating 9.0-magnitude quake struck under the Pacific Ocean, and the resulting tsunami caused widespread damage and claimed thousands of lives.