TOKYO (Yomiuri Shimbun/Asia News Network, Reuters) - The government is considering special legislation that would allow only the present Emperor, 82-year-old Akihito, to abdicate, according to sources.

Emperor Akihito will make a rare video address to the nation on Monday (Aug 8) in which he is expected to outline his concerns that he cannot do his job fully but avoid saying outright that he wants to abdicate.

Public broadcaster NHK reported last month that Emperor Akihito, who has had heart surgery and been treated for prostate cancer, wanted to step down in a few years - a move that would be unprecedented in modern Japan.

Once considered divine, Japan's emperor is defined in the Constitution as a symbol of the "unity of the people" and has no political power.

He is therefore unlikely to state outright that he wants to step down, which could be interpreted as interferring in politics.

The move to enact special legislation to allow Emperor Akihito to step down was prompted by the fact that revising the Imperial House Law to include stipulations on abdication would involve many challenges, and it would be difficult to eliminate the risk of destabilising the status of the constitutional monarch, the sources said. 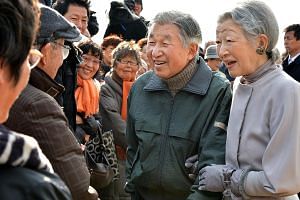 Akihito: The Emperor with the common touch

Allowing abdication would currently require an amendment of Article 4 of the Imperial House Law, which states: "Upon the demise of the Emperor, the Imperial heir shall immediately accede to the throne."

If a stipulation for abdication were added to the law, major issues would include whether it was possible to clearly define the circumstances under which abdication was allowed and what the related procedures would be.

Since the enactment of the Constitution and the Imperial House Law, the government has not expected abdication and has repeatedly denied the possibility of abdication in its replies to Diet deliberations.

Due to the advanced age of the Emperor, it is necessary to establish procedures to allow abdication within a certain period of time. But a government official said there is growing concern within the government that it would be difficult to stipulate in advance any future circumstances for abdication.

Because the special law will only apply to the present Emperor, government officials said it will be easier to gain the understanding of the public, who are concerned about the health of the elderly Emperor.