TOKYO (REUTERS) - A day after the mass murder of 19 people at a facility for the disabled, many shocked Japanese were questioning why the suspect was discharged after just two weeks from a hospital to which he'd been forcibly committed under mental health laws.

Some are also wondering why the suspect, who had written letters in February saying he would kill hundreds of handicapped people, was not kept under surveillance after he left hospital.

"Involuntary commitment is done forcefully by the authorities...If the time period drags on longer than necessary, it becomes a serious violation of human rights," Asahi newspaper said in an editorial on Tuesday (July 26).

"However, there were warning signs before the incident,"said the Asahi, one of Japan's two biggest newspapers. "Was the treatment and monitoring of the man sufficient"?

The suspect, 26-year-old Satoshi Uematsu, gave himself up to police just an hour after the frenzied attack at the Tsukui Yamayuri-En facility in the sleepy town of Sagamihara, southwest of Tokyo early on Tuesday. The victims were stabbed to death and at least 25 other residents of the facility were wounded. 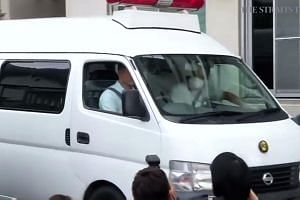 On Wednesday, he was sent from a regional jail in Sagamihara to the Yokohama District Public Prosecutors Office in Kanagawa prefecture.

Uematsu had said in the letters to a top politician that he could "obliterate 470 disabled people". He gave detailed plans of how he would do so, including breaking into the facility at night and targeting the severely disabled, media reported.

After questioning by police, to whom he repeated his extreme comments, Uematsu was sent to a hospital on Feb 19. He was discharged on March 2 after a doctor deemed he had improved and was no longer a threat to himself or others.

Given the warning signs, mainstream media raised the question of whether Uematsu had been discharged too soon from hospital, where he had tested positive for marijuana use and exhibited signs of paranoia.

Experts said there were no legal limits on the length of involuntary hospitalisation but a discharge was required once the patient was no longer deemed a danger to himself or others. The decision is up to the doctors, so it's difficult to second guess.

"The general public might think, 'Why was such a person let loose?' but forcible commitment is against the person's will so the conditions should be strict," said Fumie Kyo, a lawyer specialising in mental health patients' rights.

Nevertheless, Kyo added, it might have been possible to keep Uematsu in hospital longer under protective care even if he was no longer judged a threat to others.

The authorities have not disclosed the hospital where Uematsu was treated or identified the doctor who approved his discharge.

The experts said there was no legal requirement to keep a discharged mental patient under surveillance and indeed, doing so without permission would risk violating his rights unless the patient had previously committed a serious crime.

What sort of system should be put in place could be a delicate problem in a society where mental illness carries a stigma. "What is needed from now on is to create a soft system where officials from the department of health ask how the patient is doing," said Toshihiko Matsumoto, a physician who specialises in drug dependence at the National Institute of Mental Health.

"Most mentally ill patients do not do such a thing," Matsumoto added, referring to the killings. "It's an extremely exceptional case. I'm worried that because of such an exceptional case, the rights of people who are trying to get better will be restricted."