During the 2008 financial crisis, Japan experienced a surge in the numbers of Internet cafe refugees who could not afford rent.

Their plight led Mr Hiromitsu Kuwahara, 45, and Mr Masahiro Takasaki, 32, to ponder: "How can we help them, and the millions of impoverished workers around the world, get back on their feet?"

They have since come up with a payroll system that allows workers living from hand to mouth to cash out their wages in real time.

In 2015, when the duo were setting up their own company, they decided to do so in Fukuoka, a vibrant port city of 1.5 million people in south-west Japan.

Less than two years later, Doreming has become quite a success. It entered a partnership with Seven Bank, of the Seven & I Holdings that runs the 7-11 convenience stores, and was named one of the world's top 100 fintech firms last year.

Also from Fukuoka is Sefuri Inc, a mobile app developer run by former Tokyo-based lawyer Yoshi Haruyama, 36. Having grown restless in his corporate job, the avid mountaineer decided to return to his hometown, where he has developed top global trekking app Yamap. It has been given kudos for its accurate offline maps that can be used during disasters.

For a long time, the city of Fukuoka has been better known for its food - ramen chains Ichiran and Ippudo and teishoku set meal restaurant Yayoiken are from the city - and as the hometown of pop diva Ayumi Hamasaki.

But it is now grabbing attention in Japan and abroad for a different reason: Fukuoka has been designated the regulatory sandbox for start-up policies that, if proven successful, may progressively be rolled out elsewhere in the country.

And the early signs are somewhat promising.

Fukuoka not only boasts the highest proportion of those aged 15 to 29 in Japan, but is also the fastest- growing major city outside of Tokyo. Its foreigner population has quadrupled over the last five years.

Japan, which for years had little appetite for start-ups, now has to play catch-up amid intensifying competition for investor dollars in the region. Consider these statistics: Japan, the world's third- largest economy, raised over 200 billion yen (S$2.5 billion) in private equity and venture capitalist investment for the first time last year. This is but a fraction of China's US$31 billion (S$42 billion), and even eclipsed by Singapore's US$3.5 billion.

South Korea has also signalled its intent by appointing its first minister for start-ups and SMEs, Mr Park Seong Jin, 49, in June. Under the new Moon Jae In administration, 2.5 trillion won (S$3 billion), or about 7 per cent of the total budget, will be allocated to support start-ups as well as small and medium-sized enterprises yearly.

In March, Singapore was named the world's No. 1 for start-up talent by the US-based Startup Genome project, beating Silicon Valley. The report said the Republic's tech start-ups enjoy significant government subsidies and have access to quality talent and lower costs.

Creative ideas are most likely nurtured in a liveable urban environment with easy access to rich nature and culture, good transport networks and excellent and open universities.

FUKUOKA MAYOR SOICHIRO TAKASHIMA, who was 36 when elected in 2010.

Explaining the move, Mr Son said his native land is "too big and very slow to move", unlike "innovation- minded" Singapore.

The government, too, recognises the problem. Prime Minister Shinzo Abe, in a 2015 speech at Stanford University, said innovation is crucial to jump-start Japan's dormant economy. The dynamism and room to stomach failure seen in Silicon Valley, he said, are traits that Japan needs to emulate.

For Fukuoka, it all began in 2010 when the city elected its youngest mayor, Mr Soichiro Takashima, then 36. A year later, he visited Seattle, the western US city that bred companies like Amazon, Starbucks, Costco and Microsoft.

Inspired by the parallels between the two cities, he lobbied Tokyo to allow Fukuoka to take a more active approach to woo start-ups.

"Creative ideas are most likely nurtured in a liveable urban environment with easy access to rich nature and culture, good transport networks and excellent and open universities," he told The Straits Times.

Start-ups have been key to job creation, Mr Takashima noted. Only 8.5 per cent of all Japanese firms are aged three years and below, but they collectively account for 40 per cent of the jobs created in the past three years. "What is more important than anything for Japan is to create a society where those who take risks and challenges are respected," he said. "This is crucial to overcome the pessimistic prospects associated with a declining birth rate and an ageing population."

At the heart of his vision is the Startup Cafe, which serves as the first stop for entrepreneurs looking to bring their ideas to fruition.

Set up in October 2014, it is managed by the city government and staffed by civil servants and volunteers who not only assist with the paperwork, but also connect start- ups to experts such as lawyers, accountants and consultants who may offer pro bono advice.

Mr Kenichi Takamasu, the city's assistant director for business start-ups, said innovation is possible only when there is support.

The Startup Cafe moved to the defunct Daimyo Elementary School in April this year, breathing new life into the 144-year-old institution. The school, shut down in 2014 because of falling enrolment, was recently converted into a dedicated space for new business owners.

Now called Fukuoka Growth Next, it retains the wooden flooring, chalkboards and even the low toilet seats that were for young pupils. But what were once classrooms are now office spaces for start-ups.

The city is also trying to woo foreigners with a "Startup Visa" that gives them six months to achieve the basic hiring and capital requirements needed for a business visa.

One beneficiary is Newrocare, the brainchild of Singaporeans Xia Qian and Li Xiaoping, retired lecturers from the National University of Singapore (NUS). Their business, which is also registered in Singapore, is developing brain-related products - including one to help people sleep better. They are working with institutions such as NUS, Harvard and Kyushu University.

Since 2015, the Startup Cafe has helped more than 100 local companies - mainly in the food and beverage, technology and welfare industries - set up shop in Fukuoka.

A further 14 are foreign-owned.

The dynamism arising from the start-up push has also helped the city attract other businesses, said Mr Takeshi Saito, director-general for Kyushu-Okinawa of the Japan External Trade Organisation.

A recent case in point is Chinese bike-sharing firm Mobike, which launched its Japanese subsidiary in Fukuoka in June. Its head of international expansion, Mr Chris Martin, said the city's innovation-centric culture makes it a "natural partner" for the firm.

Line Corporation, which is best known for its messaging app, also chose Fukuoka as its second base outside Tokyo in November 2013. As of this May, 894 people from 16 nationalities were working in the Fukuoka office.

Mr Noritaka Ochiai, chief executive of Line Fukuoka, said the city's location allows it to be closer to other key Asian markets such as Taipei and Seoul, while its high proportion of youth lets the city get a better reading of its core users.

But some companies have noted that despite the optimism on the ground, it is still early days yet for Fukuoka. After all, the city has yet to produce a "start-up unicorn" that is valued at over US$1 billion. 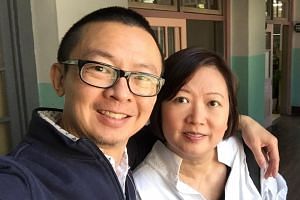 Entrepreneurs such as Mr Ichiro Kimura, 29, of Anect said most of the seed money is still in Tokyo, where most pitch events are being held. Anect, which creates secure online shopping services, has rolled out two apps in Indonesia.

And despite the growing population and high proportion of young people in Fukuoka, the demand for talent still outstrips its availability.

"Good marketing can only do so much," said Mr Mark Gaensicke, who developed "Japanese", a dictionary and study app that was one of the first apps to hit the iPhone App Store 10 years ago. The 34-year-old German added: "There is commendable effort by the government to help with taxes, management, and to provide documents in English.

"But who builds the product? What are they doing to attract developers? That really is the elephant in the room."

Some, like Doreming and Mr Gaensicke's mobile app development firm Renzo Inc, are going abroad to places with the talent pool. Doreming, which has offices in Silicon Valley and London, opened an office at Singapore's start-up hub JTC LaunchPad @ one-north on Sept 1. Singapore will serve as its business hub for South- east Asia, a market of about 600 million people, Mr Takasaki said.