OSAKA • Japan defended its security treaty with the United States yesterday, hours after it came under attack by President Donald Trump, who called it an unfair deal that allows Tokyo to just sit by and "watch on a Sony television" an attack on Washington.

In echoes of criticisms he made in 2016 on the presidential campaign trail, Mr Trump slammed the pact under which Japan is hosting about 54,000 US soldiers at 85 bases.

"If Japan is attacked, we will fight World War III. We will go in and we will protect them, and we will fight with our lives and with our treasure," he said in a television interview with Fox News. "But if we are attacked, Japan doesn't have to help us at all. They can watch it on a Sony television, the attack."

The timing of his latest reproach has raised more than a few eyebrows in Japan, which is hosting world leaders for the two-day Group of 20 Summit starting today. Prime Minister Shinzo Abe, who has met Mr Trump twice in as many months, is scheduled to meet the US leader again this morning.

Japan's chief government spokesman Yoshihide Suga cited clauses to show that the obligations under the 1960 treaty are fair for both countries, adding that the bilateral alliance is the cornerstone of peace, prosperity and freedom in the Asia-Pacific.

Senior Japanese diplomats have also tried to contain the fallout by citing their White House counterparts as saying there are no plans to review or renege on the pact.

The criticism came days after Mr Trump assailed Japan on Twitter over the US protection of its ships sailing through the Strait of Hormuz, a vital artery for oil that Iran has threatened to blockade. 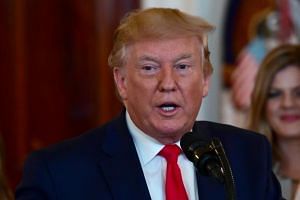 Two oil tankers - one Japanese - had been attacked when Mr Abe was in Teheran. The US and Iran immediately blamed each other, though Tokyo refused to take sides.

Mr Trump tweeted: "China gets 91 per cent of its oil from the strait, Japan 62 per cent, and many other countries likewise. So, why are we protecting the shipping lanes for other countries (for many years) for zero compensation."

Mr Abe has courted the mercurial US President over 11 face-to-face summits and 32 phone conversations. Just last month, Mr Trump became the first US commander-in-chief to be invited on board a Japanese warship, in what the two war-time enemies held up as a sign of their iron-clad bond as allies today.

Japan has forever renounced the right to wage war in the 1947 US-written Constitution, which it "reinterpreted" in 2015 to allow the Self-Defence Forces to enter into combat to help its allies in the name of "collective self-defence".

Dr Tosh Minohara, who chairs the Research Institute for Indo-Pacific Affairs think-tank, told The Straits Times that Mr Trump's remarks could be read in two ways.

It could be a form of friendly gaiatsu (foreign pressure) since the hawkish Mr Abe has made revising the pacifist Constitution a key goal in the Upper House election on July 21, he said. Or it could show how irked Mr Trump was by Japan's reluctance to take the US' side on the tanker attacks.

He saw it as a way to pressure Japan on a trade deal, but said he doubts that Mr Trump will jettison the US-Japan alliance.

"Being able to keep a significant amount of military forces in this part of Asia - close to the Korean peninsula, China and Russia - is a very good deal for the US," he said.