TIANJIN - Mr Gao Shenghong counts himself lucky. As a series of fiery explosions rocked the northern port city of Tianjin on Wednesday night, he escaped with just an abrasion on his forehead and cuts on his knee.

"There was the first explosion that lit up the sky like a fireball but it was the second one that turned the sky red, broke all the windows and threw us against the floor. It was the loudest, earth-shaking roar I've ever heard," he told The Straits Times on Thursday.

Mr Gao, 25, was one of the hundreds of patients at Tianjin's Teda Hospital seeking treatment for injuries ranging from broken bones and bruised shoulders to cuts and abrasions.

He had been about to turn in for the night in his dormitory about 1.5km from the accident site when the first explosion happened. It threw him across the room where he bumped his head and suffered cuts. Many others were not as lucky. The official Xinhua news agency said the death toll from the massive blasts had risen to 105, including 12 firemen. Some 520 others were injured, with 66 of them in critical condition.

Indian national Ashok Elangovan, 26, who has been working in Tianjin for two months, said many people were standing by the windows when the second, more violent explosion happened.

"The second blast was the one that shook the whole building violently and caused the windows to shatter and glass shards to fly everywhere. It caused the most injuries as many people, curious about the first blast, went to their windows to see what was happening. The second blast happened within 20 seconds of the first," he said.

Mr Elangovan received just a cut to his foot but said two of his colleagues had more serious injuries and needed to be admitted.

Police closed roads leading to the accident site and most of the surrounding factories were shut down. Many had broken windows and doors blown off hinges. 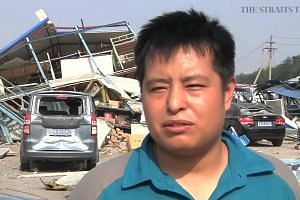 The Sheraton Hotel, about 4km away from the blast site, had the glass in one of its main entrance doors shattered and another side door blown off its hinge.

Tianjin residents rallied together with many volunteers handing out free bottled water, food and masks.

"This is the least we can do for our home," said Madam Xu Zhengli, who was at the hospital helping to distribute food.