For four days a week - from Tuesday to Friday - Mr Ryuta Nakamura joins the ranks of salaried employees and works as a software developer for IT company Cybozu.

The other three days of the week, he toils the fields in front of his home as a ginseng farmer for agricultural firm NK Agri Corporation.

"IT and agriculture are entirely different, and my two roles make for a very refreshing breath of fresh air," said Mr Nakamura, a father of two children aged 24 and 21.

Such a scheme was in the spotlight in Japan recently, when major delivery firm Sagawa Express began wooing potential employees with a four-day work week amid a labour crunch, while also allowing them to take on a second job. 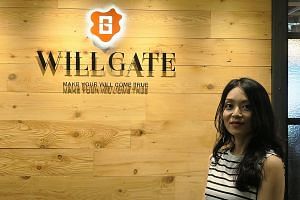 Mr Nakamura said the arrangement has allowed him to grow his networks in two very different industries, which may lead to cross-industry collaboration. But a downside is that he needed to manage the expectations of two different sets of bosses, he quipped.

Mr Nakamura, who used to work for tech conglomerates NEC and Microsoft, now also takes part in dialogue sessions with Prime Minister Shinzo Abe as Japan grapples with the bigger question of how to deal with issues like entrenched overtime.

Cybozu was launched in 1997, and has offered employees the freedom to choose how they work since 2007 - an option which the company acknowledges is still "quite unusual" in Japan.

"Work-life balance may be the catchword, but there really does not need to be a cleavage between work and life," said Mr Nakamura. "So long as you enjoy what you do, it will not seem like work."

A version of this article appeared in the print edition of The Straits Times on July 24, 2017, with the headline 'IT developer and ginseng farmer - at the same time'. Subscribe
Topics:
More
Whatsapp Linkedin FB Messenger Telegram Reddit WeChat Pinterest Print Purchase Article Copy permalink