TOKYO - Were it not for the 2011 earthquake and tsunami disaster, Ms Misaki Tanaka’s destiny might have been different.

Ms Tanaka, now 29, had just graduated from a Kyoto university when the 9.0-magnitude earthquake struck and triggered a tsunami that ravaged coastal areas of the Tohoku region, leaving more than 20,000 people dead or missing.

Ms Tanaka, who was working at a Tokyo information technology firm, volunteered to help disaster victims and clear debris.

She later quit her job and joined an organisation which supports disaster victims. She was tasked with helping to plan disaster preparedness exercises, which many saw as repetitive and boring. She set herself a goal: Make these drills interesting, even for young people.

That idea led to the creation of Bosai Girls, or Disaster Preparedness Girls, in 2013.  Its members were people she met during disaster relief missions.

Her decision to use the word “girls” in the name reflected the fact that women are particularly vulnerable in times of disaster. If she was to promote her vision of a fun and funky approach to disaster preparedness, Ms Tanaka realised she needed to reach out to young women, who are often the catalyst for new trends.

Using her knowledge in IT and fashion, Ms Tanaka and her group raised funds online and set up a website selling practical but fashionable items which could come in handy during emergency situations.

Among the items were sturdy shoes that could be folded, bags covered with 3D hazard maps of Tokyo’s fashionable Shibuya district and a “friendship” bracelet that doubled as dental floss and a washing line.

The group also organised evacuation drills in areas popular with the young, such as Shibuya and Akihabara. Participants had to use a smartphone app to find their way to evacuation centres and support stations as quickly as possible. This was designed with the goal of helping them understand the difficulties that people may face in a natural disaster.

More recently, the group launched #beORANGE, a public education project aimed at raising awareness of tsunami risks, by getting people to associate orange flags with such dangers. 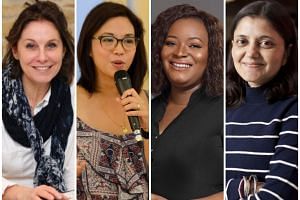 To date, the group has distributed some 400 orange flags to at least 70 municipalities in Japan.

“The foundation subsidises many different organisations, but few develop into a national movement,” said Nippon foundation member Eriko Munechika. “Bosai Girls has the means to reach a lot of people because it is asking the right question: How do we reach young people?”

The group now has more than 130 members, the majority of them women in their 20s.

Bosai Girls is now looking beyond disaster preparedness to tackle other issues, such as bullying, stalking, prejudice against sexual minorities and intense pressure from family members and others for young women to marry.

"We want to continue facing off against 'disasters' that prevent us from leading happy lives," Ms Tanaka said. "We aim to pursue new solutions that match the needs of the younger generation."