Asia is racing ahead to build the fastest and most powerful computers in the world. The Sunday Times’ Asia bureaus look at how China, Japan and South Korea are flexing their muscles in the supercomputing arena.

An interactive sign stands outside a telco shop in the upmarket Gangnam district, calling out to potential customers.

The artificial intelligence-enhanced system, powered by a supercomputer and connected to sensors, cameras, speakers and a robot inside the shop, will then recommend cellphones or offer coupons to its captivated audience.

"It appeals to millennials and digital natives, who prefer to make their own decisions without much interaction with sales people," he said, using a term to refer to those born in the digital age. The interactive sign has stood outside KT Corporation's flagship store since Aug 31 last year as part of a trial programme.

Innovations like this are fast taking centre stage as South Korea gears up for the fourth industrial revolution and spends big on developing supercomputers and related technologies, including artificial intelligence (AI), big data and the Internet of Things (IoT).

Although known for its tech advancements and fast Internet speeds, South Korea is a relative latecomer in the fields of AI and supercomputers. It was only in April 2016 that the Ministry of Information and Communications Technology (ICT) pledged to invest 100 billion won (S$123 million) in projects including the building of the country's own 30 petaflop supercomputer by 2025.

The decision to play catch-up came after Google's computer AlphaGo beat one of South Korea's best Go players Lee Se Dol in a historic machine-versus-man win, in 2016, triggering calls for the country to boost its own AI development.

South Korea has only five supercomputers ranked on the latest TOP500 list of fastest computers in the world, used mainly in its weather agency and by Internet providers. But none are Korean-made and the fastest is only 2.39 petaflop, as compared with China's top-ranked 93 petaflop system, which is 39 times faster.

The decision to play catch-up came after Google's computer AlphaGo beat one of South Korea's best Go players Lee Se Dol in a historic machine-versus-man win, in 2016, triggering calls for the country to boost its AI development.

A spokesman for the Ministry of ICT told The Sunday Times it has been working with two consortiums since May last year to develop and integrate the hardware and software needed for the supercomputer project.

It involves about 300 experts from IT companies, research institutes and universities. 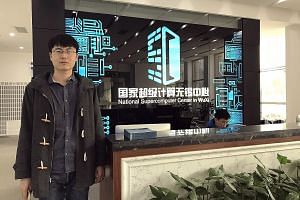 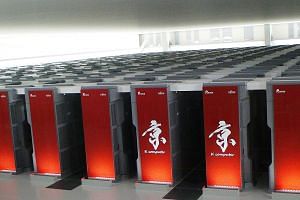 The digital push is backed by President Moon Jae In, who hopes that government support for the fourth industrial revolution, combined with private efforts, can create thousands of new jobs and generate economic benefits worth some 40 trillion won.

The Ministry of ICT said AI is key in leading the fourth industrial revolution and that AI-related investments increased 47 per cent to 163 billion won last year, up from 110 billion won in 2016.

The KT sign, for one, is able to have "very natural interactions" with prospective customers because it is backed by a supercomputer with very fast processing speeds, he said. "We will be able to do more in the future, such as developing a multilingual system."