BEIJING (REUTERS, AFP) - An explosion at a plant in central China has killed at least 21 people and injured five, state media reported on Thursday (Aug 11).

The blast happened at a power plant in Dangyang, in the central province of Hubei, on Thursday afternoon, state television said. Rescue efforts were underway, reports said.

The blast came a day before the first anniversary of giant explosions that killed at least 165 people in the northern port of Tianjin. 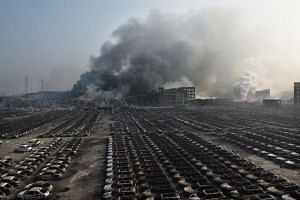 A year on, survivors haunted by China's Tianjin chemical blasts

A photograph purportedly from the scene showed a bare concrete shell and metal scaffolding standing by a smokestack.

The local government said it was investigating the cause of the accident.

Three people were seriously injured and were being treated in hospital, reports said.

Newspapers said the company operating the plant was registered for power generation and sales of slag ash and petroleum products.

Deadly accidents at industrial plants in China are relatively common, and repeatedly raise questions about the country's safety standards.

Earlier this year more than 130 people were taken to hospital after chemicals leaked from a plant in eastern China.

In April a chemical fire burned for 16 hours in the coastal province of Jiangsu after an explosion at a facility storing chemicals and fuel, requiring 400 firefighters to quell the flames.

The massive blasts in Tianjin, which caused over US$1 billion (S$1.3 billion) in damages and killed at least 165, sparked widespread anger over a perceived lack of transparency by officials about the accident’s causes and environmental impact.

A government inquiry into the Tianjin accident released in February recommended 123 people be punished.