BEIJING - India has offered to export soybean and other agriculture products to China, amid an escalating trade spat between Beijing and Washington.

Mr Rajeev Kumar, vice-chairman of the National Institution for Transforming India, made the offer on Saturday, at the fifth India-China Strategic Economic Dialogue in Beijing.

"We have noticed that you import a lot of agricultural products probably to the tune of US$20 billion (S$26 billion) or more," news agency IANS quoted Mr Kumar.

"And I was noticing that there were some tariffs that were issued on farmers from Iowa and Ohio," said Mr Kumar.

"Maybe India can substitute for something like soybeans and sugar if we could have access to those exports with all the due quality considerations for that you might have on our farmers. That might be very useful," he said, according to NDTV.

Fears of a trade war have been rumbling since last month (March). US President Donald Trump has threatened a series of tariffs on hundreds of billions of dollars of Chinese goods, sparking tit-for-tat warnings from Beijing.

The stand-off lies in the Trump administration's ire at massive levies and what it considers unfair practices by China that he says are costing American jobs, according to Agence France-Presse. 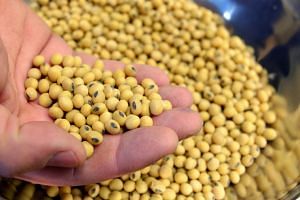 China deploys soya beans in trade war, but may end up hurting its own economy

China unveiled a list of 106 US goods including soybeans, whiskey, frozen beef and aircraft targeted for tariffs, just hours after the Trump administration proposed duties on some 1,300 Chinese industrial, technology, transport and medical products, according to Reuters.

The dialogue in Beijing was attended by the delegation of China's National Development Reforms Commission.

Mr Kumar said that India and China need to work for a better economic climate for investors and entrepreneurs.