A 10-year-old girl has been her mother's primary caregiver for the past four years since a brain haemorrhage left her mother with severe memory loss and a child's intelligence.

Since she was six, Cai Cheng Cheng has been helping her mother Chen Li with physiotherapy and other daily exercises, according to Chengdu Business News.

The Cai family live in Yibin, China, with two children, Cheng Cheng and her brother Ling Zhi, 18. In 2014, Madam Chen had been on a walk with her husband Cai Yong when she experienced headaches. After returning home to rest, she fell unconscious and was later rushed to hospital where she was diagnosed with a brain haemorrhage.

Madam Chen was unconscious for more than a month, during which then newly enrolled primary school pupil Cheng Cheng would call her daily after school, begging her to wake up.

When Madam Chen was finally able to return home, she was unable to walk and take care of herself. "She recognised that I was Cheng Cheng, but could not call me by my name," said her daughter.

The young girl became the primary carer for her mother as her father had to work late hours to cover hospital bills, and her elder brother was busy with school, reported Chengdu Business Daily.

Twice a day, she would help with and supervise her mother's physiotherapy exercises before heading to school or bed.

To remind her mother to take her medicine, Cheng Cheng pasted on the living room wall seven printouts of different cartoon characters that she matched with the different medications that Madam Chen had to take daily. 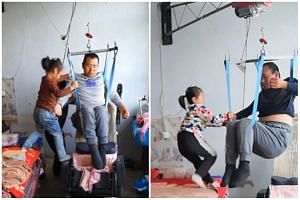 She also used flashcards that her mother had once used with her to teach Madam Chen new words. She said: "I paired the words I wanted to teach her with animals and foods I liked, to make it more interesting for her."

Initially, Madam Chen could only learn one word a day. Today, she has relearnt how to speak, read and do simple mathematical calculations, and is able to help out with basic errands at the family store. She can also walk, albeit with support.

The six-year-old's dedication to her mother was recognised with achievement awards for filial piety from her local government as well as from Chinese state broadcaster CCTV.