Nations urged to act before issue piles pressure on economy

Group of 20 (G-20) finance ministers and central bank chiefs meeting in Japan - where a rapidly ageing population is a major domestic problem - have been warned to address the issue before it is too late.

"What we are saying is, if the issue of ageing starts to show its impact before you become wealthy, you really won't be able to take effective measures against it," Japanese Finance Minister Taro Aso, the meeting's host, told reporters late on Saturday.

The G-20 is a mixed group of countries at various stages of de-velopment and population profiles, ranging from rapidly ageing Japan to Saudi Arabia, next year's G-20 chairman, which has a very young society.

In their communique, the group said "demographic changes... pose challenges and opportunities for all G-20 members", and the issue requires a mix of "fiscal, monetary, financial and structural policies".

Host Japan is eager to share its experience, with Mr Aso sounding the alarm that countries must be ready to act before population ageing rears its head and piles pressure on the economy.

Longer life expectancy and sliding birth rates, particularly among wealthy nations, have resulted in a rapid expansion of the elderly population in places such as Spain, Italy and South Korea, according to the Organisation for Economic Cooperation and Development (OECD).

But the pattern is not limited to the rich world, with emerging powers such as Brazil and China also facing rapid demographic change relative to their early development stage, according to the OECD.

By 2050, the world is projected to have more than two billion residents aged 60 and above - more than double the number in 2017 - the OECD said.

But many economies have failed to update their pension and employment systems to adjust to the changing demographics, experts warn.

This has resulted in fiscal and debt risks for whole countries, as well as individuals.

With its fast-shrinking workforce, Japan finds itself scrambling to find ways to cover the cost of its national pension.

It has left many elderly people fearing cuts to their benefits, while young people worry that a pension may not exist by the time they retire. 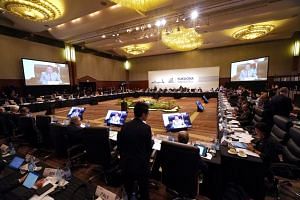 Meanwhile, a shrinking labour force means Japanese companies are unable to fill job openings. While unemployment stands at 2.4 per cent, the job-to-applicant ratio was 1.6 earlier this year.

Individuals are increasingly working beyond the traditional retirement age, while economies must offer jobs that older workers can perform, experts said.

Technology may help train elderly workers and assist them in accessing necessary services such as healthcare and in managing their finances.

So, global leaders in the finance sector, not health ministers, must take the lead, said Mr Aso.

Yesterday's talks aimed to prepare the ground for the leaders' summit in Osaka at the end of the month, as ageing becomes an increasingly pressing issue for the global elite.

"Most of the G-20 nations already experience or will experience ageing," said Bank of Japan governor Haruhiko Kuroda.

"We need to discuss problems that arise with societal ageing and how to deal with them."

The Group of 20 (G-20) said global growth appears to be stabilising and should pick up moderately later this year and into next year. But it added that "growth remains low and risks remain tilted to the downside".

"Most importantly, trade and geopolitical tensions have intensified. We will continue to address these risks and stand ready to take further action."

Ministers at the meeting said: "International trade and investment are important engines of growth, productivity, innovation, job creation and development."

The G-20 statement noted that global current account imbalances have narrowed since the 2008 financial crisis, but remain large and persistent.

For the first time, the G-20 tackled the issue of ageing as a potential risk to economic growth.

They were also urged to consider "designing the tax system in an equitable and growth-friendly manner so as to better respond to the challenges posed by ageing".

In addition, ministers were asked to weigh "assisting financial institutions to make any needed adjustments to their business models and services".

In response to tax challenges arising from digitalisation, and amid discussion of a global system to tax Internet giants such as Google and Facebook, the ministers vowed greater efforts for a consensus-based solution, with a final report by next year.

Technological innovations such as cryptocurrency can deliver significant benefits to the financial system and the broader economy, the G-20 statement said.

However, "while crypto-assets do not pose a threat to global financial stability at this point, we remain vigilant to risks", the ministers added.