HONG KONG/BEIJING (BLOOMBERG) - Chinese offices are not known for cushy perks. So imagine Mr Ben Jiang's surprise when he showed up one morning to find a bright pink kiosk in the lobby, laden with fruit, yogurt and steamed buns.

The brainchild of Mr Fresh - one of Beijing's buzziest startups - its free-standing shelves do not lock away or even tag its wares, they just ask that shoppers scan smartphone codes to pay for whatever they grab.

"I know people in the office have taken away stuff worth 5 yuan but just pay 1 yuan," said Mr Jiang, who works in the Beijing technology hub of Zhongguancun.

"They have these open shelves that have no way of monitoring what people are doing. It's so unreliable to just base a business model on people's good behaviour."

Some of China's most powerful corporations and investment houses disagree.

From Alibaba Group Holding and Tencent Holdings to Walmart and Sequoia, companies have poured more than US$1.7 billion (S$2.2 billion) into startups such as Mr Fresh and Xingbianli (Gorilla Convenience) that for now offer little more than tricked-out vending machines or kiosks.

It is the latest example of "Fear of Missing Out", a phenomenon that is more apparent in China than anywhere else. Snubbed by Silicon Valley, the kiosks are popping up across the world's No. 2 economy.

While e-commerce giants Alibaba and JD.com experiment with unmanned retail stores, similar to Mr Jeff Bezos's Amazon Go venture, the new upstarts are targeting consumers inside thousands of offices from Shenzhen to Shanghai.

It is a high-tech twist on the venerable vending machine, with the latest iterations hawking cooked food and strawberries. They will track purchases via facial and object recognition and a smartphone app. 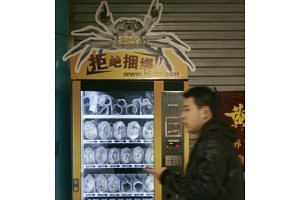 At least 19 companies have attracted over US$1.7 billion in funding, according to data from iResearch and Bloomberg. The idea is to blanket offices with their machines, gain users, raise money, elbow competitors aside (not necessarily in that order) - then build in technology when they achieve scale.

It is a tactic straight out of the Chinese startup handbook, bankrolling not just bike-sharing and food delivery but short-lived fads such as basketball and umbrella rentals.

"It's the way things are in the investment circle these days. People are all fighting to get a piece, to place a bet due to fear of missing out," said Mr Wang Hongtao, deputy secretary-general of the China Chain Store and Franchise Association.

But "it's quite challenging to win over the retail market just by relying on unmanned shelves".

Tencent-backed Mr Fresh, a spinoff of better-established online grocer Miss Fresh, attracted US$200 million from big names including Qiming Venture Partners and Genesis Capital. That is remarkable given the company for now just stocks basic shelves in offices like Mr Jiang's.

The company would not disclose losses but it is the price of business in a country where duelling bike and food services subsidise meals and rides to the point where they are practically free.

So Mr Fresh is developing facial and object recognition to limit shenanigans. It is pouring money into data to predict which shelves need to be refilled, and with what.

Chief executive officer Li Yang says it is crucial to provide what buyers want. The most popular are lychee, peaches and small boxes of US cherries at US$1.60 apiece.

"Technology is something we're trying to improve on," Mr Li explained. "It's an entry point to retail, making it more convenient for consumers."

The broader economics of unmanned retail are not well-documented. While it is true that such endeavours do not need people at the checkout, they are required to stock shelves, deliver goods and fix systems that break. Its complexity is already forcing a rethink at some outfits.

One of the highest-profile, Guoxiaomei (Beautiful Fruit), said it is scaling back on certain units and shifting to partnerships instead of owning shelves and kiosks. That is after raising US$50 million in its latest round from the likes of IDG Capital.

Yet, investors remain optimistic. Revenue generated from unmanned retail could more than double to 62.4 billion yuan (S$13.1 billion) by 2020, according to iResearch.

"Bike sharing and food delivery also didn't do so well overseas, but thrived in China because the market is different," Mr Li argued.

Startups like Mr Fresh are counting on two things: laziness and cravings. By going where people work, they are betting that buyers will pay more for the same goods they can get at a convenience store.

Logistics is key. Mr Fresh, for instance, is relying on Miss Fresh's storage network and an army of people to refill shelves and kiosks.

"If you're only selling non-perishable goods, you have no competitive advantage. Only fresh produce can be attractive, but that places a huge demand on fulfilment," said Mr Richard Peng, founder of Genesis Capital, a Mr Fresh backer.

Another well-funded player is Dada-JD Daojia, a JD affiliate that has placed almost 10,000 smart kiosks in places including backer Tencent's offices. It has raised US$800 million from investors including Sequoia and Walmart.

The company said about half its kiosks have facial recognition, and all will eventually be able to identify items and automatically deduct payment - even calculating weight to weed out inaccuracy.

For now, even advocates of the concept agree it is a nascent model in need of a customer.

"It will take a lot of investment before a winner possibly emerges," said Liu Xing, a partner at Sequoia Capital China.