SEOUL (THE KOREA HERALD/ASIA NEWS NETWORK) - South Korean rapper Psy admitted that Low Taek Jho, a Malaysian fugitive involved in the 1MDB scandal, was his friend and that he had attended a dinner gathering arranged by Yang Hyun-suk, head of K-pop powerhouse YG Entertainment.

Low, sought by the authorities in Malaysia, Singapore and the United States in connection with the 1MDB scandal, earlier said through his spokesman that he had met Yang through his friend Psy, denying allegations that he had received sexual services procured by Yang at the dinner party.

One of the investors was reported to be Low, who was central to the scandal in which US$4.5 billion (S$6.2 billion) was allegedly embezzled from the state investment fund 1Malaysia Development Berhad. The other man was said to be a Thai man, known as Bob.

"Regardless of whether he was a good friend or not, it is clear that I was his friend," Psy wrote on his Instagram account on Wednesday (May 29).

"When Jho Low and his friends visited Korea, Yang and I were invited to a dinner with them. We had the meal and drinks with other guests, and Yang and I left the table early."

When Psy met him, Low had a big presence in Hollywood showbiz industry and Psy introduced Low to Yang, the rapper said in the posting.

"At the time, I just thought it was a dinner gathering with a friend from afar," he said. "I apologise for causing concern."

The police have launched an investigation into Yang, who is the founder of YG Entertainment, considered one of the "Big Three" entertainment companies in South Korea.

K-pop acts such as BigBang, Blackpink and Winner hail from YG. 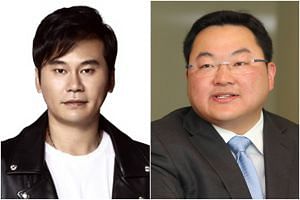 At the dinner party for Low and Bob, there were 25 women, including more than 10 prostitutes from an adult entertainment establishment with close ties to YG, and eight men accompanying Yang, according to the TV show.

YG has denied the allegations and called them "groundless".

The police also began a probe into suspicions that the Thai man known as Bob raped a woman last year.