OSAN AIRBASE (South Korea) • More than 50 boxes that North Korea handed over to the US last week appear to hold human remains from the Korean War, and are likely those of Americans, according to an initial forensic analysis.

A US military transport aircraft flew the remains from the North Korean city of Wonsan last Friday, a first step in implementing a deal reached at a landmark summit between North Korean leader Kim Jong Un and United States President Donald Trump in June.

Just before the remains were due to be flown to Hawaii for further analysis and identification, Mr John Byrd, director of analysis for the US Defence POW/MIA Accounting Agency, spoke to reporters at Osan airbase in South Korea yesterday.

He said: "There is no reason to doubt that they do relate to Korean War losses." More than 7,700 US troops remain unaccounted for from the war, which lasted from 1950 to 1953.

About 5,300 of those were lost in what is now North Korea.

Mr Byrd said a single identification "dog tag" was also handed over by the North Koreans. The soldier's family was notified, though it was not clear if his remains were among those that were found, he added. 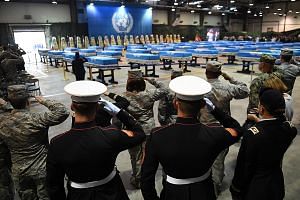 Still, the initial "field forensic review" indicates that the "remains are what North Korea said they were", Mr Byrd said.

The North Koreans provided enough specifics about where each of the suspected remains were found that US officials have matched them to specific battles fought from 1950 to 1951 - though not necessarily individuals, he said.

The pledge to transfer war remains was seen as a goodwill gesture by Mr Kim at the Singapore summit.

While it has taken longer than some had hoped, the handover rekindled hopes for progress in talks with North Korea aimed at its denuclearisation.

A version of this article appeared in the print edition of The Straits Times on August 02, 2018, with the headline 'Human remains from N. Korea likely those of Americans: US'. Subscribe
Topics:
More
Whatsapp Linkedin FB Messenger Telegram Reddit WeChat Pinterest Print Copy permalink