Travel agents in the Chinese city say they have seen a surge of interest from across the country in recent weeks, boosting an already strong peak tourism season.

North Korean leader Kim Jong Un's economic reform plans and warming ties between Pyongyang and its main backers in Beijing were behind the jump in activity, agents said.

"People who may have long been curious about seeing North Korea may think that now it is safer than ever," said tour guide Teng Yi, who returned from leading a tour to Pyongyang on Sunday.

After meeting with Chinese President Xi Jinping in Beijing on June 19, their third such summit since March, Kim spent the subsequent month inspecting factories and industrial projects along the Chinese border region.

The unusually long trip, plus meetings with US Secretary of State Mike Pompeo and South Korea's unification minister, underlined Kim's desire to rally support at home for his economic drive and convincing outsiders of his willingness to denuclearise.

A dip in visitors after a tour bus crash killed 32 Chinese nationals in April proved a mere blip. Half-day and one-day tours to the neighbouring North Korean city of Sinuiju now book out within an hour of tickets being released, travel agents in Dandong say.

Four-day tours, which take in the capital Pyongyang and the Panmunjom truce village are fully booked through to the end of August, despite increased capacity through more frequent trains and coaches.

Tourism is one of the few remaining reliable sources of foreign income for North Korea, after the UN imposed sanctions targeting 90 per cent of its US$3 billion (S$4 billion) annual exports including commodities, textiles and seafood.

China has not provided a breakdown of the number of tourists travelling to North Korea since 2013.

The Korea Maritime Institute, a South Korean think-tank, estimates tourism generates US$44 million a year for the isolated country, with Chinese tourists making up about 80 per cent of all foreign visitors to the North.

At a plenary meeting of the ruling Workers' Party central committee in April, Kim said the North would shift its national focus away from a "two-track" strategy of developing the economy in tandem with developing nuclear weapons, having successfully concluded the latter.

The national focus, he said, would now solely be on developing the economy.

Betting on Pyongyang's pledge to rebuild its economy, property speculators pushed up home prices in Dandong to such an extent that local authorities stepped in to impose purchase restrictions in May.

However, questions remain about Kim's willingness to give up his nuclear weapons programme and whether he continues to develop missiles and nuclear material.

The unpredictability of Kim and the continued uncertainty since his meeting with Donald Trump in June has meant most traders and businesses in Dandong continue to hold out a pragmatic 'wait and see' attitude.

But those with a more optimistic bent in Dandong told Reuters they saw Kim's travels in the Chinese border region, including to the island of Hwanggumpyong, as a signal the long-dormant special economic zone marked out there between the two countries in 2011 could be revived if things progress well.

The plans for Hwanggumpyong, adjacent to Dandong, were announced to much fanfare, but already stuttering progress was curtailed in 2013 when Kim executed his uncle Jang Song Thaek - a top official who handled most of the North's dealings with China. 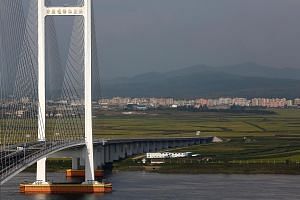 North Koreans keeping their eyes on the prize

The value of new property developments in the Dandong New Zone, designed to feed the Hwanggumpyong joint economic zone, spiked by more than 30 per cent immediately after Kim first announced his economic focus, but has since cooled slightly as the U.S. maintains pressure to keep sanctions in place.

Sanctions have weighed on traders in Dandong who deal with North Korean coal and other heavy commodities, as well as factories and restaurants who employ cheaper North Korean labour.

While restaurant owners and staff say restrictions remain on bringing in North Korean workers on new long-term visas, some circumvent the ban by bringing in staff on short-term permits with different visa classifications.

"Chinese authorities turn a blind eye," said one restaurant owner requesting anonymity because of the sensitivity of the matter.