For relatives, it means more anxiety as probe tries to confirm if it belongs to MH370 plane

The discovery of part of a plane's wing on an Indian Ocean island triggered hope and heartache for anguished relatives of those on board missing Flight MH370, which vanished 16 months ago.

For most relatives, the discovery of the part means yet more waiting as investigators try to confirm if it belongs to the Boeing 777 that is believed to have crashed into the Indian Ocean off Western Australia.

Even then, the discovery won't tell investigators where the plane's final resting place is.

Ms Jacquita Gonzales, the Malaysian wife of Mr Patrick Gomes, the flight's cabin crew supervisor, said the news had set her on an emotional roller coaster: "It has started all over again, staring at the handphone constantly for news. We are just waiting again, like before."

Mr G. Subramanian, whose Malaysian son S. Puspanathan was on board, told Agence France-Presse that his heart broke every time friends and relatives asked about the 34-year-old. "I hope we can confirm this is from MH370. I want a closure to this mystery," he said.

There were 239 people on board the plane. Among the 227 passengers were 153 Chinese nationals, whose relatives are angry over the lack of confirmation about what happened to their loved ones.

"We don't want to hear an official giving 99 per cent guarantee. We want 100 per cent confirmation!" they said in a statement posted on social media yesterday afternoon.

"No matter where the wreckage is, what we are most concerned with is the whereabouts of our loved ones. Did the plane land somewhere halfway? No one has confirmed even whether all the passengers had boarded the plane!" 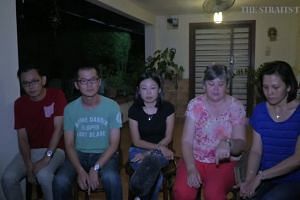 MH370 vanished on March 8 last year shortly after taking off from Kuala Lumpur for Beijing. Since then, search-and-rescue efforts in the South China Sea and the Indian Ocean have yielded no conclusive evidence of the plane's location.

Some Chinese relatives told The Straits Times they were sceptical the latest find was linked to MH370 as they cling on to hopes that their family members are still alive. "Our hopes have been raised so many times, only to be dashed," said Mr Jiang Hui, 41, a representative of the families' group and whose mother Jiang Cuiyun, 71, was on board.

Experts say the part appears to be a flaperon, part of a wing's moving surface. Even if the part does belong to MH370, he said it does not mean the plane had crashed there.

"We believe this is not an ordinary aviation mishap but the work of a conspiracy," said Mr Jiang.

"The plane could have landed elsewhere first and then met with a mishap after flying again. Or the wreckage could have been intentionally discarded there to deceive us. We need to see all the evidence to know the true story."

Australian Kaylene Mann, who lost her brother and sister-in-law Rodney and Mary Burrows, said the news brought happiness, then sadness. "What's that going to prove? It only confirms they are in the right area. We still need to find the whole plane," she told Australia's Fairfax Media from Brisbane.

Her husband, Mr John Mann, believes the wreckage is part of MH370. "It confirms that they have been searching in the right area as far as I am concerned," he said.

Ms Sara Weeks, the sister of MH370 passenger Paul Weeks of New Zealand, said she "felt a bit sick" when she saw reports about the flaperon on TV. She told Fairfax New Zealand: "I'm hopeful, in another respect, I'm not. I guess while you don't know, you still hope."

The search for MH370 clues